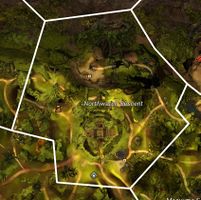 The Northwatch Descent is an area of the Auric Basin. One of the three watchposts defending Tarir, the Forgotten City is located there.

Collect sediment from the fallen Exalted for Arcanist Mariette (80)

Section-stub. This key section of the article is incomplete. You can help the Guild Wars 2 Wiki by expanding it.
Reason: Need full list of which ones are here

Whispers Agent: So I've seen the walking mushrooms. What do you think they are?
Whispers Agent: One attacked me as I walked by. I didn't even know it was there!
Whispers Keeper: I wonder what would happen if you accidentally got a piece of them in your mouth as you fought.
Whispers Keeper: Would it taste terrible? Poison you? Make the walls breathe? I wonder...

If Help Sage Zende defeat the colossal Mordrem thrasher and power up the pylon event has just finished
Scholar Keenwit: You won't believe it! We summoned a druid. And it restored the healing powers of the Maguuma waters!
Arcanist Mariette: Don't pull my leg. I don't have time for nonsense.
Scholar Keenwit: By iron, I'm not. It happened. I'm going back to purify the springs. The waters strengthen any who bathe in it.
Scholar Keenwit: I can rig up some purifiers. Once the springs are cleansed, the water will flow to Tarir and help their defenders.
Scholar Keenwit: All right, but only because you're working with the commander.

Scholar Keenwit: Just move this and hook that up. And what do you know? Another purifier.

Scholar Keenwit: Adelia, I hope you're safe, wherever you are.

Scholar Keenwit: The druid said there was an imbalance. I wonder...

Section-stub. This key section of the article is incomplete. You can help the Guild Wars 2 Wiki by expanding it.
Reason: Probably more