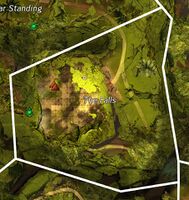 Map of The Falls

The Falls are a large set of waterfalls located in southwest Auric Basin. 250 years ago the base of the waterfall hid Zinn's Secret Lab after the asura surfaced due to The Great Destroyer's awakening. In the past two centuries, it has become home to some Itzel hylek.

Starting from the large jutting rock in the middle of The Falls, glide west towards the vista which is located on a thin tree branch, but don't try to land directly on top of it as the branch is easy to miss. Instead try to land on the thicker part of the branch just above and walk down to the branch with the vista.

Section-stub. This key section of the article is incomplete. You can help the Guild Wars 2 Wiki by expanding it.
Reason: Confirm all dialogue is here to remove stub tag

Tlalli: Hello, friend. How are you on this fine day?
Patli: Good, I have been studying the saurians that surrounded us this afternoon.
Patli: They're fascinating. I don't know how they exist among the evil forces that have taken over our beloved jungle.
Tlalli: Do not think too hard. If I've learned anything in this jungle, it's that life will always find a way.

Tlalli: I have come to see if a dream I had last night would come true.
Patli: Tell me about this dream.
Tlalli: We were within Tarir’s gold walls and we had just defeated the dragon’s saurians.
Tlalli: We were successful, and the Exalted kept their city safe.
Patli: I hope it stays true.

Tlalli: The falls are breathtaking.
Patli: They are. It makes me want to swim all day.

Tonuac: I was almost eaten by a saurian yesterday, to the north of here.
Zyanya: How did you get away?
Tonuac: Did what I always do. Backed away slowly so as not to get noticed.
Zyanya: I'm glad they don't come here often. If they did, I'd have to pay more attention to what's going on around me.