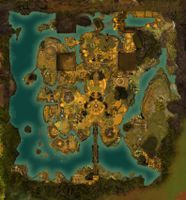 The Gilded Hollow is one of the two guild halls located in the Heart of Maguuma. It is accessed via the Sealed Passageway located beneath Tarir.

Travel to the Gilded Hollow entrance tunnel, located beneath the golden city at the center of Auric Basin. Meet Kogga inside the hollow and clear the Mordrem infestation there to claim this guild hall.

— Expedition to the Gilded Hollow

Cavern Mine Waypoint — (requires guild mine) 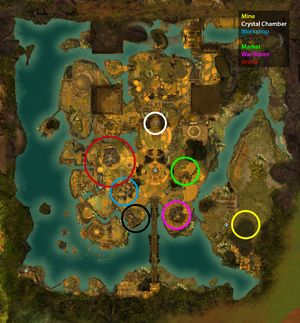 Section-stub. This key section of the article is incomplete. You can help the Guild Wars 2 Wiki by expanding it.
Reason: Kogga also says other things, missing other NPCs such as upgrades for War Room Restoration 1/2 from Sophia Carriker

Kogga: The Gilded Hollow has a lot of history. We've just got to uncover it!

Kogga: I hope the Exalted don't mind us using the place. I mean, they didn't need it anymore, right?

Kogga: Archaeology's kind of a hobby...but I'm hoping to make it more of a profession.

Guild Initiative Representative: We need to clear this tunnel to get to the good stuff further down.

Guild Initiative Representative: Which do you prefer? A pick or a shovel?

Guild Initiative Representative: Nothing wrong with a little honest work.

After Mine Excavation 1
Rekka: Finally! We're breaking ground on the mine! Uh, literally and figuratively speaking.
Rekka: Let's go see what the dig site looks like!
Rekka: Hmm. Not bad, not bad at all! Solid geology. Plenty of room for expansion.
Rekka: I just know we're going to find tons of raw aetherium here. You'll see!
Rekka: And in that vein...heh...I do have some thoughts about increasing efficiency.
Rekka: For example, do the miners really need three entirely separate meal breaks? Why not eat everything at once?
(After Kensho arrives at the central hollow waypoint)
Kensho Arrowsoul: Greetings. I have come to share my wisdom with your guild.
(After Kensho walks over to the tavern)
Kensho Arrowsoul: Greetings, tavernmaster. May the winds lift you to glory.
Gamli Aðalsteinnson: Winds...? Uh, well, thank you. May the winds lift you...a beer.
Kensho Arrowsoul: Beer, you say? Ah, yes. I would like some of this beverage. Thank you for your offer.
Gamli Aðalsteinnson: Before you drink anything, I should ask you-have you had beer before?
Kensho Arrowsoul: Only once, when celebrating the death of Zhaitan with some norn in our trading post. It is...quite pleasant, this beer.
Gamli Aðalsteinnson: We're going to get along just fine.

After Mine Excavation 2
Rekka: Excellent. Expanding the mine will allow us to increase production!
Rekka: We're definitely going to need more aetherium storage tanks.

After Mine Excavation 3
Rekka: I'm very pleased. This place is finally starting to look like a functional mine.
Rekka: Since we have the space, I'm thinking we should move the miners' beds in here. Get rid of that wasted travel time!

Bug:
Sometimes the southernmost plant synthesizer will not spawn when an instance of this map is created.
Guild halls