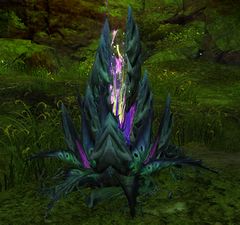 Up in the cliff's face, in a small cave, a Mordrem Flower rests among a small group of Mordrem Bombers. Interaction with the flower will trigger the group event Defeat the vinetooth.

From the Eastwatch Waypoint, head south through the cave to the pylon (east of the Weeping Glade). Use the southernmost Bouncing Mushroom to ascend the cliff, head right once at the top. The cave with the Mordrem Flower is on your left from the strongbox.

A strong sense of dread surrounds this flower.