This article is about the Deepstone Fractal boss. For the Kodan figurehead, see Voice. For people who do voiceovers, see Voice actor. 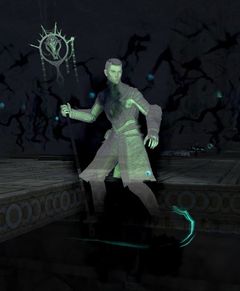 Can you hear my song echo through the darkness?

The Voice is an ominous entity encountered in the Deepstone Fractal. It becomes the final boss of the fractal after it corrupts Torin.

The Voice is an entity of unknown origin. At some point in history the dwarves trapped it in the Deldrimor treasure vault of Deepstone with a powerful arcane ward created by a magical crystal and abandoned the site. Years later, a group of treasure hunters found and explored Deepstone while searching for riches and unwittingly removed the magical barrier around the vault, allowing the Voice to possess a treasure hunter named Torin whom it intended to use as a physical vessel to flee from its prison.

Section-stub. This key section of the article is incomplete. You can help the Guild Wars 2 Wiki by expanding it.
Reason: List missing skills. If all skills are present, remove this