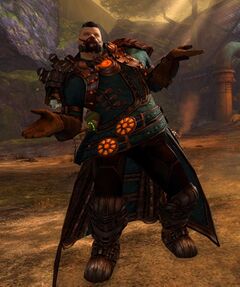 Slick is a powerful, high-ranking norn member of the Aetherblades located in Twilight Arbor along side his partner-in-crime, Sparki. He seems to be the more level-headed of the pair and specializes in oil-based attacks, serving as the fuel to Sparki's fire. The duo is first seen briefly in Ooze Font, but afterwards they appear in The Clearcut as the first actual boss encounter in path 3 of Twilight Arbor (explorable).

In combat, he wields what appears to be a variation of the flamethrower made to spew oil and tar and possesses a unique mechanic, the Oil-Absorbing Ooze. Most of his skills deal damage over time and some also synergize with Sparki's attacks. If Sparki is killed before him, he'll create Tar Pools more frequently.

Slick does not directly drop loot, instead a chest will spawn once he and Sparki have been killed, of which contains:

Downing foe and disengaging
Because it has. Scarlet said, "Catch and burn anyone who doesn't run fast enough." You should have run faster. (Said as a follow up to Sparki's comment)
Heh. Another log for the fire.

Death
Don't bury me here. I don't want to be plant food.