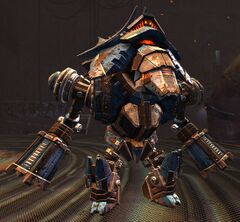 Sparki is a powerful, high-ranking asura member of the Aetherblades located in Twilight Arbor along side her partner-in-crime, Slick. She seems to be a bit of a pyromaniac and specializes in fire-based attacks, serving as the ignition to Slick's fuel. The duo is first seen briefly in Ooze Font, but afterwards they appear in The Clearcut as the first actual boss encounter in path 3 of Twilight Arbor (explorable).

In combat, she operates what appears to be a Molten Firestorm suit and most of her skills inflict burning, some even synergize with Slick's attacks. If Slick is killed before her, she'll gain an effect that inflicts burning each second to enemies who are not moving.

1 Sparki also uses this skill once right after the cutscene ends to destroy nearby Overgrown Volatile Blossoms.

Sparki does not directly drop loot, instead a chest will spawn once she and Slick have been killed, of which contains:

Bug:
If Sparki is interrupted while casting her Ground Bloom skill, the interrupt animation will play, but the damage from the skill will stay for an additional few seconds.