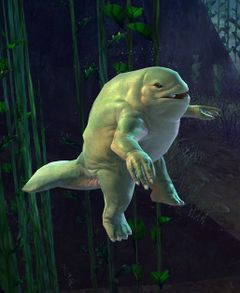 Morraloo was a cultural representative selected to attend the burning of the effigies during the first annual Dragon Bash and place memorials of kin killed by the dragons on the pyre. Morraloo runs off when one of the pyre is sabotaged to explode. Morraloo is later found at a quaggan village in Sorrowful Sound. Hostile Aetherblades are around him. Morraloo says he was blackmailed into carrying their offerings to the effigy. He is then convinced to return to Lion's Arch.

Speaking to Morraloo during the epilogue
Does this mean quaggan is safe now?

Yes. The people who threatened you have bigger problems.