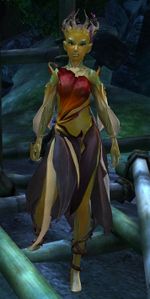 Astorra was a cultural representative selected to attend the burning of the effigies during the first annual Dragon Bash and place memorials of kin killed by the dragons on the pyre. Astorra runs off when one of the pyre is sabotaged to explode. She is found at The Rowanwoods in Caledon Forest with hostile Aetherblades surrounding her. She was threatened with jail time into helping the Aetherblades' plan. She is persuaded to return to Lion's Arch.

Speaking to Astorra during the epilogue
Of course, I was innocent. Well, of what happened on that stage. Never saw the point of murder. Why kill someone when you can convince them to lavish you?