This article is about the Canthan dragonjade corporation. For the historical banking guild, see Xunlai Guild. 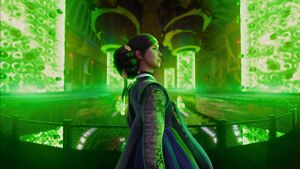 Xunlai Jade is a Canthan corporation co-founded by Yu Joon and Park Chul-Moo. At present, it is solely owned and operated by Joon, with Chul-Moo having left the company to found the Jade Brotherhood in 1833 CC CC (1323 AE)[1], due to disagreements with Joon.

Xunlai Jade Corporation is an entity for the mining and production of jade-related technology [2]. They own numerous holdings throughout Cantha, including the Xunlai Jade Quarry (and exclusive mining rights in the region), the Power Plant and several other installations in New Kaineng City, the Xunlai Jade Junkyard in the Echovald Wilds, and more. Their most important, and most secretive, installation is the Yong Reactor. Through years of maneuvering, they have gained an almost monopolistic control of jade tech in Cantha, from mining through to production [3].

The beginnings of the company can be traced back to 1820 CC (1310 AE), when Yu Joon first encountered naturally occurring dragonjade [4]. Her mother, a jade trader, received a shipment containing some unusual jade quarried near the Harvest Temple, which carried a magical charge. Experimenting with this, Joon placed a piece into her amber-powered lantern, finding that it glowed twelve times more strongly when powered by this new jade [4]. Today, the company popularizes this experiment as her first dragonjade innovation [5].

No records exist from the foundation of the company, but somewhere between 1820 and 1828 CC, Park Chul-Moo and Yu Joon must have become the operators (potentially founders) of the company Hyeoksin Jade, presumably on the basis of Joon's earlier experiments.

In 1828 CC, Hyeoksin Jade began construction on the Yong Reactor, initially designed as a geothermal generator to supplement the company's growing power requirements for New Kaineng City [6]. This installation would go on to become arguably the company's most important asset.

In 1829 CC (1319 AE), Hyeoksin Jade acquired the assets, patents and trademarks of the Xunlai Guild, an old banking guild managed by Luen Ai [2]. At the same time, the company changed its name to Xunlai Jade Corporation, leveraging the newly-acquired Xunlai Guild trademarks [2].

In 1830 CC, Xunlai Jade acquired exclusive mining rights to the Jade Sea region, including all assets and land rights previously belonging to the Silver Dawn Mining Group [7]. These rights will last for a period of at least ninety-nine years, unless cancelled by both the Ministry of Land Management and the Imperial Court [7]. With the acquisition of these rights, Xunlai Jade gained an effective monopoly on the extraction of viable dragonjade, given that the Jade Sea is the largest continuous area of jade in all of Cantha.

The partnership between Yu Joon and Park Chul-Moo was legally dissolved in 1833 CC, with the two settling for an unknown amount. The cause for dissolution was rising tension between the two co-founders, with Chul-Moo describing Joon as "visionless" and Joon referring to Chul-Moo as "small-minded". Chul-Moo's mother, Matron Park, attempted to gain a share of the settlement amount, due to her contributions to the company's early prototypes—but written evidence demonstrated that the contributions were a gift [1]. Joon remained as the head of Xunlai Jade, with Chul-Moo leaving to pursue his "side project", which became the Jade Brotherhood.

At an unknown time, Soo-Won sought out Joon, seeking her help to channel and filter the magic returning to her via the ley lines after the deaths of her children, the Elder Dragons [8]. It seems likely that this was in the year 1835 CC (1325 AE), after the death of Zhaitan, the first of Soo-Won's children to die. In order to fulfil this plan, Joon proposed an unprecented alteration to the company's Yong Reactor, only five years into its operation. Claiming it to be a "new type of turbine", Joon and her engineers proposed an installation of huge jade tech rings, which it was later revealed would house Soo-Won [6]. Later in 1835 CC, the Yong Reactor refit was completed, with Soo-Won sealed inside and her surplus energy flowing into hundreds of waiting pieces of jade [9].

The Yong Reactor refit marked a turning point for the company, as their stores of dragonjade had been dwindling prior to Soo-Won's assistance. With the dragon's help, they would be able to utilize every piece of the Jade Sea, yielding an almost limitless supply of dragonjade. Where Xunlai Jade products were previously expensive luxury items, the company would now be able to begin production on a line of budget products, fulfilling Joon's promise to bring jade technology to everyone [9]. Soo-Won's presence in the Yong Reactor was highly-classified information, with only Joon, Empress Ihn, the government, and the reactor workers being aware of the true source of jade power [10].

In 1837 CC, Fa Yang was hired as Head of Security for Xunlai Jade. He is either Joon's biological uncle, or someone she has a familial relationship with, as evidenced by an admonishment in his employee file that he is not "Uncle Fa" while at work [11].

In the first quarter of 1838 CC, Xunlai Jade reported record profits, presumably due to the increased supply of jade from the Yong Reactor, and the effect of that increased supply on the company's ability to design and manufacture more complex and more affordable technology. The Kaineng Insider described the company's growth in the past few years as "exponential" [12]:

Yu Joon, daughter of Yu Anhjong, a jade trader, has seen her company grow exponentially over the last few years, maneuvering itself from a producer of simple novelties to producing a full line of now-indispensable jade technologies that are changing how we work, play, and live.

In 1842 CC, the Aetherblade pirate, Mai Trin, almost succeeded in breaking into the Yong Reactor [13]. She was apprehended by Xunlai Jade security forces, but Joon took a chance and hired her as an Executive Assistant, recognizing her value and resourcefulness [14]. In particular, Joon needed access to the world beyond Cantha, something Mai Trin and her crew of Aetherblades could provide [15]. Joon herself was aware, to some extent, of Mai Trin's piratical history, but withheld this information from the company to limit its liability.

In 1843, Xunlai Jade hired Zhou Yao as an Associate Engineer. Yao was a former Jade Brotherhood member, and is an excellent engineer who designed their own jade tech prosthesis. They expressed an interest in becoming a project leader in Xunlai Jade's MedTech department. [16]

As each of her children died, Soo-Won was loaded with increasing amounts of magic to filter. That magic became further corrupted with every one that died [17]. This corrupted magic seeped into the supply of dragonjade from the Yong Reactor, causing an increased rate of failure in jade tech devices [18].

In 1845 CC (1325 AE), Yu Joon, seeking knowledge about the Elder Dragons in order to improve the Yong Reactor's filtration systems, inadvertently set in motion the events that revealed Cantha to the rest of Tyria. She assigned Mai Trin and her Aetherblades to import a dragon researcher, assuming that they would do so legitimately [19]. The Aetherblades, at Ankka's suggestion, lured in and captured Gorrik, an asuran dragon researcher. The Pact Commander pursued the Aetherblades through The Mists, forcing them to crash-land in Cantha. This revealed the Aetherblades to Cantha, and Cantha to Tyria. Xunlai Jade used this chaos to promote the reopening of Cantha's borders, with Joon leveraging her close connection to Empress Ihn (the two being half-sisters) in the hopes of gaining access to foreign markets [20]. Jade tech malfunction rates continued to increase, with seventeen dangerous incidents occurring in the same quarter that the Tyrians arrived in Cantha [21].

In this time, Joon developed a strong working relationship with Taimi, an asuran scientist who was part of the Commander's party. Together they designed a jade tech exoskeleton for Taimi, reducing the physical symptoms of her degenerative disease by as much as fifty percent [22] [verification requested]. Joon intended to take the device to market for human usage, having sent the blueprints to Xunlai Jade's MedTech department.

With Mai Trin and the Aetherblades no longer under Xunlai Jade command, the company faced a great deal of uncertainty. This came to a head when the Commander and their allies partially deduced the secret of the Yong Reactor: that the jade is charged with pure dragon magic [23]. Joon, hoping to head off further suspicions, invited the Commander to visit the reactor. Shortly after, the facility was hacked and all communications with the outside world were cut [24]. When the reactor was destroyed and Soo-Won escaped, Joon assumed the worst, dispatching Captain Fa and Xunlai Jade security forces to apprehend the Commander's group [25].

When Navan, Empress Ihn's trusted advisor, organized a meeting with the Commander and Detective Rama to defuse the situation, Captain Fa interjected, attempting to arrest the Commander once again. He exercised Xunlai Jade's rights under the Autonomy Resolution — the right to claim jurisdiction for events on company property, even overruling the Ministry of Security [26][27]. Even so, he failed once more to apprehend the Commander, leaving the matter of the Yong Reactor incident unexplained. Captain Fa also continued to deny Soo-Won's presence at the Yong Reactor, presumably as a matter of company policy [28].

Without Soo-Won powering the Yong Reactor, Xunlai Jade would no longer be able to produce charged dragonjade, resulting in a total failure of all jade technology within weeks or months [29]. Joon frantically worked on developing improved filtration systems for the Yong Reactor, intending to recapture Soo-Won and safely drain the Void magic from her [30]. She also collaborated with Taimi on the means for the recapture operation, though it was never revealed how they planned to subdue Soo-Won [31]. When the Commander broke into her home and breached her security, Joon once again assumed the worst, especially as Taimi had betrayed her trust by granting them access. Although they convinced Joon of their innocence, Joon and the Commander were unable to agree on a solution to the Soo-Won problem [32]. Joon was eventually convinced to follow the Commander's plan, and collaborated with Taimi to rebuild Ankka's Extractor, in the hopes of draining the Void magic and killing Soo-Won. Yao, a Xunlai Jade engineer, also participated in the preparations, supplying spare parts and helping to set up the extractors in the field [33].

Following Soo-Won's demise, the future of Xunlai Jade is uncertain. Without a source of energy to charge their dragonjade, any existing jade technology will eventually run out of energy and shut down [29]. Joon promoted Yao to Head of Xunlai Jade R&D, in order for them to help investigate alternative power sources [34]. The company's ideal goal is to produce charged dragonjade without having to involve an Elder Dragon, and Joon, Yao and Taimi will all collaborate to pursue that aim. Failing that, Aurene has also agreed to help however she can, for now [34]. Both Yao and Taimi, being at least partially reliant on jade tech prosthetics, have a very personal motivation to support the company in finding a solution to its power problem before their own devices stop working [35][36].