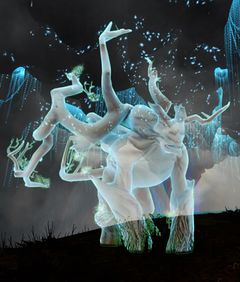 Broadleaf is a Druid found in Savage Rise. He can be reached by gliding to Wind Rider Ledge from one of the higher waypoints. In the southwest part of the area, a ley line starts from the top of a rock. Broadleaf is right at the end of the ley line. If you have the Ley Line Gliding mastery, you can Oakheart to the top of the rock and then glide the line to him.

Also able to reach using the Oakheart's Reach from the Scout's Clearing, scaling the ledge directly south of the heart, then traveling west.

You, your allies, and your enemies must leave this place soon, before it's too late. Why have you come?
(if The Druid Stone is unlocked and have at least one Fire Orchid Blossom in inventory)

I have a Fire Orchid blossom for you. Will you tell me about this place?

This place is older than it may seem. The Fire Islands spread far beneath the waves with many proto-islands being formed by the volcanic activity of the area. (receive A Flower for Broadleaf)

Such a bed of creation immersed in the elements of earth, fire, and water was ripe for the establishment of one of Melandru's gardens. This was one of the first.

I have a bouquet of Fire Orchids for you. Will you tell me more?

We thought it was so clever, creating a hollow within a volcano at the bottom of the ocean. It was peaceful. Serene. Exactly what we were striving for, and so it remained for hundreds of years. (receive A Bouquet for Broadleaf)

Our gardens were well hidden under the waves, high above the clouds, and deep within the earth, but then Tyria changed. Some of our sanctuaries were revealed, making them vulnerable. Then Zinn came.

Matters of great import that I must get back to.
If Sprouting the Druid Stone is unlocked and have an Onyx Lodestone and 5 Fire Orchid Blossoms in inventory:

I have a[sic] onyx bouquet of Fire Orchids for you. Will you tell me more?

When Primordus awoke, volcanos in Tyria became very active and grew. Our home here also grew, emerging from the waves that had kept us concealed for so long. (Receives An Onyx Bouquet for Broadleaf)

Like a beacon on the horizon, Zinn could not resist, but he did not know what he would find here. He came down like a force of nature, crushing our harmony and twisting it for his own purposes.

If A Henge Away from Home is unlocked and have 5 Onyx Lodestones and 10 Fire Orchid Blossoms in inventory:

I have an earthen bouquet of Fire Orchids for you. Will you tell me more?

He perverted our nature magic, stealing it from our very bodies. This was not his home to take. It is OURS, and we showed him how unacceptable his behavior was.

Matters of great import that I must get back to.