Notes from Rata Novus is a tale written by Ross Beeley featuring the experiences of Taimi in Rata Novus during the Heart of Thorns storyline. 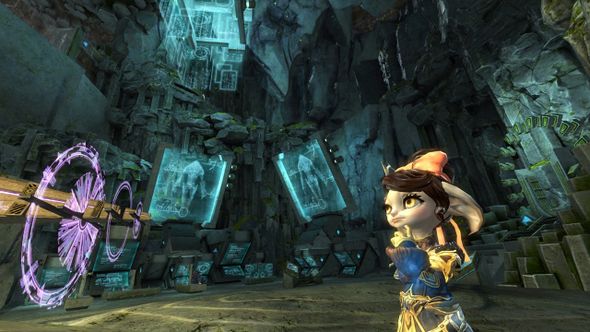 This is bliss! I have to admit, when the commander left with the others, I was a tiny bit nervous about staying here by myself, but what a dream this turned out to be! I haven't slept in a week, and I don't want to sleep for at least another two! Or three. Maybe four. (Note: Look into alternative to sleep.) There's so much data here, this place should have been called Data Novus! (Note: Does lack of sleep make you smart and hilarious? I think so.) It feels like it'll be almost impossible to go through it all by myself... But the last thing I want is some other nosy researcher horning in on my work. So many theories are swirling around in my brain; I know I'm on the verge of something big. I just need time to draw some solid conclusions.

One of the more remarkable things I discovered here is a replication (or maybe the original prototype?) of the ley-line map we found just outside of Tarir. The magical network of ley energy is alive! It goes this way, and then that way. One minute it's here, and then the next it's over there! I had no idea it was in constant flux. Although I've had a little contact with friends on the outside, I wouldn't need their input to tell you definitively that the commander's mission was successful! Mordremoth is no more! There was an intense light coming from that part of the jungle, and then one morning I woke up and it had dimmed, and the rest of the map was lit up like a Lunar New Year fireworks show!

I'm developing a system to track and log the flow of magic. I hope to find some sort of pattern. I mean, it can't just be completely chaotic, can it? Or maybe it can... Maybe it has to be! But at the same time, maybe it can't be! Both arguments make an equal amount of sense to me right now... (Note: Investigate impact of sleep deprivation on rational thought.)

I've observed that the egg chamber is definitely brighter than it was. Caithe told me she was going to check on the egg and make sure it was okay. (Note: Of course she is.) I have a hypothesis about her Wyld Hunt, but I'll keep that to myself in case this journal ever gets away from me. (If it does and you're reading it, Caithe: Hi, friend! You're the greatest and you always make the best decisions!) (Commander, if you're reading this: wink, wink.)

Okay, I just reread those last few sentences and it's possible—though not very plausible—I'm cracking up. Maybe I could use someone to talk to... But not a real someone. They'd just slow me down or worse. Oh! I almost forgot about Scruffy! He's not a real someone! I miss the big guy. I'll have to formulate a new design for him... But do I have time to get sidetracked? No. I can't. Not now at least. Anyway, I'm getting along just fine! Besides, I can always talk to my new friend, Plant! She's a beautiful little fern who sprouted from one of the cracks in the floor of the dragon lab. She's pretty cool, but quiet and green. Kinda like a shy Sylvari. (Note: Does the number of sleepless nights correlate to the amount of new flora friendships? Conclusion: Highly probable, but who cares? New friends!)

Wait, what was that? Hmmm...if I didn't know better, I'd say it sounded like the gate powering up. Curious. Plant, keep an eye on my journal, I'll be right back! 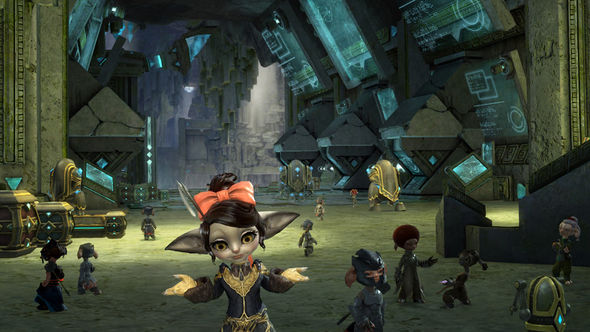 They trampled Plant! Those monsters!

I knew my days of solitude were numbered here, but I didn't think they were this numbered. Word of Rata Novus's discovery must have hit Rata Sum. Asura are pouring in like migrating dolyaks, although most dolyaks I know have better manners! How many times can a girl get bumped by someone setting up a research station before she snaps?

The answer is six, and then you scream, "STOP BUMPING INTO ME WHILE YOU'RE SETTING UP YOUR RESEARCH STATION, WINDALL!" at which point everyone looks at you like you're crazy for some reason!

Thankfully, when the interlopers arrived, I had a chance to shut the door to the dragon research area before they got too deep into the lab, so no one knows about the really juicy stuff. I need to keep that as my surreptitious sanctuary. The question is how to get in and out of there unnoticed... Oh! Maybe...yes! No, that'll never— Well...yes! Okay, secret plan number 72—let's call it: Granted Access Teleport Expressway! (Wink, wink.)

I'd been very careful about what I powered up to keep the chak numbers down, but these mindless numskulls are flipping switches left and right! History is bound to repeat itself at this rate! At least we know the causality of the chak and their appetite for ley energy. I think the Rata Novans figured that out a little too late. The chak are already popping up more often, so not only do I have to deal with Windall and his abnormally intrusive elbows, but now there are bug pieces everywhere! Have you ever stepped ankle deep into a pile of spiracles? It'll ruin your day. Granted, with me, it doesn't take much to be ankle deep, but still! On the plus side, I'm getting quite familiar with chak anatomy. Which will come in handy on our next chak-anatomy trivia night! (Note: Organize a chak-anatomy trivia night.)

The only other benefit to come out of this influx of dolyaks is that news from the outside world is flowing in more regularly. I heard Braham is back in Hoelbrak. Breaks my heart to think what he's going through. I should make my way up there to pay my respects soon. I've been working on a remote communicator based off some research here that uses the ley-line network to transmit your voice—maybe I can hide it in the lab and talk into my end every once in a while so people think they hear me buzzing around. I've worked too hard to lose my alpha status here. On the other hand, I could also use it to make them think this place is haunted. That's a good option too! We'll see!

Speaking of ghosts that need to be laid to rest, a lot of these new incomers still harbor a healthy amount of distrust where the sylvari are concerned. I mean, Mordremoth was dispatched—what more do they want? How can you be told what to do when there's no one to tell you what to do? At least, I think that's the way it works? When Caithe was here, she said the call was gone, and she had even heard of new sylvari being born after Mordremoth's death! Which means the Dream is alive and—

Oh, for the love of the Eternal Alchemy! Windall just bumped me again! I gotta take a dolyak to manners school—be back soon! 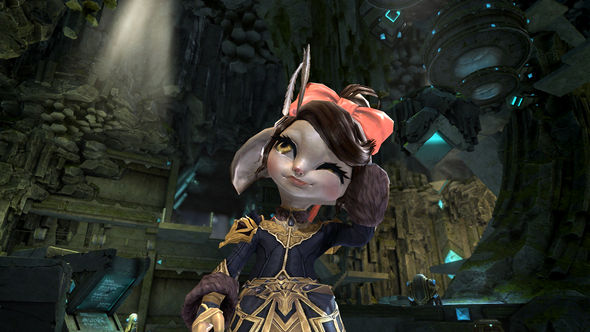 You know what, journal? These Rata Novans might have been onto something.

There's a primal pleasantness I'm feeling about living underground. Being constantly surrounded by soil and sediment and geological history—it's like Tyria itself is giving you a dirt hug from all angles!

Being born in Rata Sum, I only really knew about surface life (except for that one time I fell into a deep ditch), but I get it now. Primordus forced us above ground, and the Rata Novans said, "No." I'd like to think if I were alive back then, I'd have made a similar stand (and then realized the chak problem ahead of time, naturally).

So now I carry on their work. I feel...obligated to them in a weird way. They knew running from the dragons wasn't a permanent solution. We have to turn and face and vanquish. That was the brave philosophy they put forth (which is kind of ironic considering how living underground could be misconstrued as burying your head in the sand!). I owe it to them to finish what they started—and this time, it's personal. Ha! I actually meant that, but then realized how cliché it is... But it's apt! So very apt! I guess this is how the cliché started in the first place!

Anyway, Primordus is first on my list because the bulk of the research here is focused on that dragon, but I recently hit upon a few nuggets of information on the beast in the Crystal Desert. The Exalted and the Novans shared a lot of tech, and I guess some dragon data as well. They were as concerned with Kralkatorrik as we were with Primordus. That's because they were constructed by the Forgotten. Now, the Forgotten were dedicated to Glint. And Glint was a former Kralkatorrik...um...chief baddy? Champion? Yes. A champion who went rogue and tried to protect all peoples from the dragons (my type of lady!). After her death, they went to great efforts to ensure the safety of her legacy. And you know what a big piece of that legacy is? The egg!

I wonder if the commander would mind if I borrowed it from Tarir for a little testing here in the lab...

Wow, I gotta get ahold of myself. I bet that's how Caithe's logic worked when she took off with the egg in the first place! Okay, so maybe I can't (or shouldn't) physically get it here...but if there was some way to keep an eye on it... Hmmmm. This bears investigating.

Another gift from the Exalted is the ley map I mentioned earlier. Now that the fireworks show has slowed a little, I think I've noticed quite a bit of Mordremoth's old energy sliding in one particular direction. I say "I think" because honestly the magic's movement is still erratic enough that I can't tell if it's a pattern or not. Also, I don't even know how reliable and accurate the map is. The evidence flowing in could be misleading... Once I get it dialed in, I think it might be time to craft a letter to the best dragon slayer I know. Hopefully, my research will do right by the Novans, and the commander and I will soon be able to turn and face and vanquish...