From Guild Wars 2 Wiki
Jump to navigationJump to search
Stub. Key elements of this lore article are incomplete. You can help the Guild Wars 2 Wiki by expanding it.
Reason: may need additional lore, if not remove stub tag please 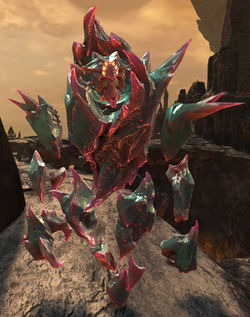 Jade Constructs are ancient construct creations of the mursaat, used largely as their foot soldiers as the mursaat were focused as spellcasters. They are legless floating golems made of large loose chunks of dark purple jade, held together by magic. The Jade Constructs require a lot of magic to become animated, and as such have remained dormant since the end of the Krytan Civil War in 1329 AE. However, with the White Mantle's studies into the Maguuma Jungle's Bloodstone at Bloodstone Fen and its recent explosion, several Jade Constructs have become reactivated.