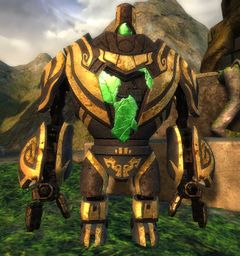 M.O.X. is a unique ancient golem which was created by the asuran golemancer Zinn. It is in a state of disrepair after 155 years without its master. After the player has completed the story instance Heart of the Volcano on a character, M.O.X. appears in that character's home instance and allows the player to play music from the original Guild Wars game.

Section-stub. This key section of the article is incomplete. You can help the Guild Wars 2 Wiki by expanding it.
Reason: Expand biography with Guild Wars 1 and intermediate years stuff.

M.O.X. activated greeting mode when it was approached by the Pact Commander in 1330 AE. Deducing that the Commander had arrived for a reason and learning of the quest to access Zinn's vaults, M.O.X. offered an access code in exchange for the Commander reactivating incapacitated golems in the area. It also instructed the Commander to find a key gem from a Webby which had eaten a researcher who had originally stolen the key.

Once the Commander had recovered the key and aided the golems, M.O.X. altered the security on Zinn's vaults to allow the Commander access to them while also revealing the locations of the vaults. Grateful for the golem's help, the Commander suggested that M.O.X. return to civilization with the Vigil who had arrived on Draconis Mons with a submarine. M.O.X. accepted the offer and asked if Webby could come along, only for the Commander to deny any carnivorous spider passage to the mainland.

Once the Commander's mission to Draconis Mons had concluded, M.O.X. returned to Central Tyria with the rest of the party and settled into the Commander's home where it provided additional information about the history of Zinn and Rata Arcanum, offered to play back some of Zinn's favorite music from the past as well as looked after various cats the Commander had adopted during travels. A Webby hatchling had managed to sneak off Draconis Mons undetected by hiding within M.O.X. and kept the golem company in their new home.

In home instance
BY YOUR COM-MAND

Do you have any old-time music in your data banks?

PER-HAPS YOU WOULD LIKE TO HEAR ONE FROM THIS DA-TA BANK.

Tell me, how did you end up in the volcano?

Zinn Mega History...activate. (Starts outside dialogue. See below this section.)

I'm glad we found you. You're a little piece of history.

Have the cats been behaving themselves?

THEY ARE FAS-CI-NAT-ING. WHEN YOU ARE GONE, THEY SLEEP MOST OF THE TIME, WAKE, AND ZIP A-ROUND LIKE MOD-EL Z.M. GO-LEMS, EAT, AND THEN SLEEP SOME MORE.

The following is the above text repeated, but formatted more for legibility:

When entering the home instance
M.O.X.: WEL-COME HOME. I HAD TO CLEAN UP A-NO-THER HAIR BALL WHILE YOU WERE GONE.