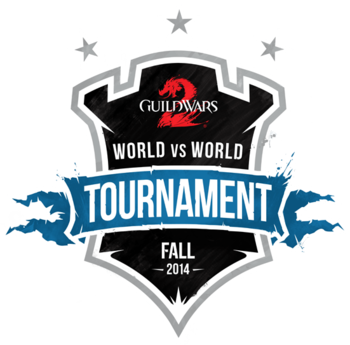 WvW Fall Tournament 2014 is the third WvW tournament for Guild Wars 2; it lasts four weeks beginning September 12, 2014 and continuing through October 10, 2014. As with the first season, worlds in each region are divided into three leagues: Gold, Silver, and Bronze. Each week of the tournament, players who complete at least five events in any WvW map will receive WvW Tournament Claim Ticket based on their world's placement during that week's match up.

As with previous tournaments, the one has its own achievement category in addition to the standard WvW achievements:

Rewards are given out separately for each matchup. To be eligible for rewards, you need to earn that match's weekly world contributor achievement. Then, in the week after the matchup, Battle Historian will award a reward chest based on the world's placement in the matchup. The rewards must be claimed in the week following the matchup or they will be forfeited.

After the tournament, on Saturday, October 11, a majestic dolyak statue was added to each citadel which grants a time-limited buff increasing World experience, experience gain and Magic Find. The duration of the buff depends on the world's overall placement in the tournament: