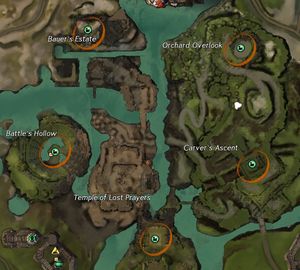 Ruins of Power are areas in the center of each Borderlands map. These capture points must be captured and held to earn ranks of Borderlands Bloodlust. They will slowly decapture if left unguarded. The quantity of players on a point does not affect the speed of its capture. These points lack defensive walls or gates; rather, the terrain offers natural chokepoints and hidden routes to facilitate ambushes. Each capture point is overlooked from a tactical vantage point by a Master Cannon build site which only requires 10 supply to build.

Once a world has captured at least three of the five ruins, a countdown will begin. If that world can continue to hold three or more ruins for a two minute span it will earn one rank of Borderlands Bloodlust buff for its members on all maps in WvW. For each rank of Bloodlust, this buff provides progressively diminishing bonuses to attributes and one bonus war score for every enemy player killed with a finisher. Only one finisher per kill counts towards this score.

The buff remains on that world until another world is able to claim it by capturing and holding three ruins themselves.