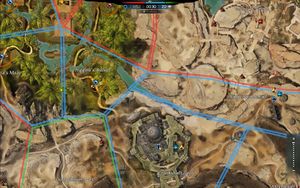 Dustwhisper Well is controlled by Green, Osprey's Palace by Red, and several territories by Blue.

Territories are defined areas of land associated with World versus World objectives. The territories are outlined on the map with team-coloured overlay. Capturing an objective grants your team control over the territory and allows the team members with War Gliding Mastery to glide within the area, while for enemies it becomes a No-Fly Zone. The objective will also lend its Guild Objective Aura to the territory if there is an active Guild Claim on it.