Objectives are areas in World versus World that can be taken over by each world. Each objective are guarded by different NPCs and Guards, and each objective contains a Supply Depot. There are four different kinds of objectives:

The ownership of an objective by a world (Blue, Green or Red) is displayed on the WvW map. Each objective contributes a certain amount of points towards the owning server's war score.

The following table shows the amount of the objectives on each map. 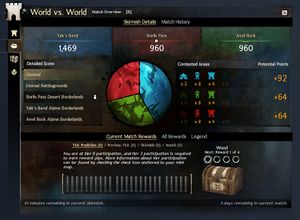 War Score details for points earned from objectives is displayed in the World vs. World panel.

Every 5 minutes, the objectives controlled by each world are totaled and added to that world's cumulative score. The score is added at the start of the next 5 minute interval, so objectives flipped before the timer starts again (during the --:-- phase) will also count for points.

Players must defeat the objective's Veteran Supervisor (camps), Champion Tower Lord (towers), Champion Keep Lord (keeps), or Legendary Castle Lord (castles) to allow the capture point to appear. Successfully defending the point for 30 seconds will change the objective's ownership to the claiming world. Enemy guards and players can contest the point, preventing progress to the capture until they are removed from the circle.

Capturing an objective will add points depending on the objective's tier once to the war score.

After an objective is captured:

Depending on the type of objective, there are a number of obstacles that must be overcome before it can be captured. The following table lists the defenses that each objective type possesses:

1. Stonemist Castle only has inner gates and no inner walls.

The longer a world holds an objective, the more it will be upgraded to make it harder to capture.

Objectives gain up to 3 tiers the longer it is held by a world's team as it receives supply caravans from resource camps. With increasing tiers, objectives gain automatic upgrades and gain slots for guild claiming upgrades.

Objectives can be claimed by a guild. Claiming puts the guild's emblem onto the banners hanging from the objective. Tactics, Improvements, and guild objective auras become available if the guild has unlocked them. Additional upgrades to objectives can be unlocked through the War Room in the guild hall. A guild is limited to claiming a maximum of one objective at a time per map. If an objective has been claimed, a small yellow shield appears next to its map icon.