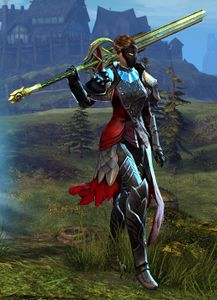 Legendary Bandit Executioner is a bandit that has a chance to show up after defeating one of the bandit leaders needed for Long Arm of the Light, with the chance increasing if a player nearby has a Bandit Death Mark in their inventory. The Executioner wields a greatsword, and has medium damage weapon skills; however, Sword of Vengeance is quite powerful and can be cast on multiple targets in quick succession. The Executioner is accompanied by several Veteran Bandit Casters, who provide healing,

Regeneration to the Executioner. The Executioner moves at walking speed, becoming vulnerable to crowd control only while attempting to finish downed players.

[Group Event] Slay the Bandit Executioner before they exact revenge (40)

- turns blue when Executioner is finishing a downed player.

Section-stub. This key section of the article is incomplete. You can help the Guild Wars 2 Wiki by expanding it.
Reason: Skills may be missing, if not, remove stub tag

* if Bandit Death Mark is in inventory