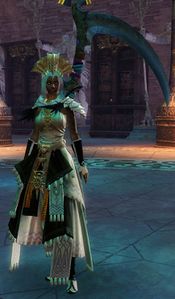 We all serve Joko—in life or in death.

Warden Amala, previously known as High Priestess Amala and Executioner Amala, is a high-ranking officer in the Mordant Crescent. In the past, after the events of Nightfall, she was the leader of the Sunspears, but was defeated by traitors and subsequently killed and Awakened by Palawa Joko. She is a powerful dervish, allowing her to invoke the power of the gods.

High Priestess Amala was a leader of the Sunspears during Palawa Joko's conquest of Elona. She led the defense of a city which the lich king's Awakened and Mordant Crescent assaulted. Despite putting up a fight and invoking the gods as a dervish, she was ultimately defeated when Joko's army stormed the city.

Joko gave Amala a choice: either pledge allegiance to him and serve him alive, or die and be Awakened to serve him as an undead. The high priestess remained loyal to the Sunspears and refused to submit to the lich king. Disappointed but nevertheless expecting such a defiant response, Joko had Amala killed and Awakened, dubbing her Executioner Amala. Joko then ordered her to execute her Sunspear companions, and she carried out the lich king's orders without mercy despite the pleas of her former allies.

Amala was eventually made the warden of the Mordant Crescent Great Hall in the Domain of Istan. She would imprison enemies of state in the dungeon beneath the hall and have her Awakened minions keep watch. Centuries later Amala worked with local corsairs, offering them bounties on the heads of dissidents whom the corsairs tracked down and brought to her.

In 1330 AE, Amala received the latest quarry from the corsair Sayida the Sly: Spearmarshal Zaeim who had been leading the Sunspear revolt in Istan. Sayida later returned to the great hall, bringing with her the shackled Pact Commander who had interfered in the internal politics of Joko's kingdom during the campaign against the rogue god Balthazar and become an enemy of state. Amala was surprised by Sayida's success but was unable to learn how the corsair had bested the infamous Commander.

Before leaving with the gold, Sayida insisted on offering the warden and her minions a drink of the famous corsair grog in Joko's honor, arguing that refusing the offer would displease the lich king who wanted his name to be praised. Amala reluctantly agreed but quickly focused on the Commander when she heard a strange voice calling for the Commander. Angry and suspicious, the warden knocked the Commander unconscious and had them dragged to the dungeon. She recovered a remote communicator from the Commander's belongings for further study.

Following the Commander's escape, Amala Awakened and resumed her duties as the warden. She defended the Mordant Crescent Great Hall from raiders who consisted of Sunspears, adventurers and the dragon Aurene. After a fierce fight, Amala was struck down once again although she promised that she would see the mortals again. Keeping her promise, the warden would indeed rise once more as a dark ritual was cast over the great hall which not only resurrected her but also forced the raiders to flee to safety and try their luck again later.