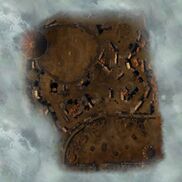 Join the Flame Legion in an assault on an Ascalonian city.

The Urban Battleground Fractal is one of the Fractals of the Mists. The fractal consists of the invasion of an unnamed Ascalonian city by the Flame Legion. Players are transformed into charr and must take over the city. The fractal is a depiction of the events of The Searing, where the charr invaded the kingdom of Ascalon.[1] The "Massive energy spike" Dessa talks about in the final line of dialogue is the beginning of the Searing.

First head into the battlefield, and go north to the marker. Getting to this point is difficult as every Ascalonian is of Veteran status while your allies are normal. There is a group of Veteran Flame Legion to the middle south section, but they do not appear to move. The party must move to the gate and take it down so you may progress. A champion, Siegemaster Dulfy, will be standing in front of the gate you need to destroy, along with two ballistae, two arrow carts, and 3 Pots of Burning Oil raining fire just over the gate. Dulfy is capable of using all of these at once and can repair (or rebuild) them if they are damaged, except for the burning oil. The best method to pass this fight is simply to ignore the siege equipment and destroy the oil first. After this, Dulfy should fall much more easily. Arrow carts and ballistae do minimal damage, but the latter can be annoying with their knockdown. The burning oil is easily avoided simply by not being too close to the wall, but beware that the oil actually has more range than the animation suggests. It is advised to remain spread out while destroying these siege weapons as arrow carts have a wide range and rapid deployment. Be careful of additional Ascalonians that decide to join the fight. Demolish the gate after Dulfy has fallen.

One strategy in this area is to wait for the initial allies to attack and clear some of the initial mobs until they die. They will respawn in the initial tent. After this move immediately to the right hand side and avoid most of the mobs. Clear any in the immediate vicinity and move along to Dulfy. Clearing the oil with ranged attacks should be the first priority. After this AOE capable characters should attack Dulfy and the surrounding ballistae and arrow carts, melee characters should attack Dulfy directly. Break her defiance bar when possible.

Once the gate is destroyed, find your way to the courtyard though the city.

The city has random components, so the path may not be the same each time it is visited. Heading right and circling around the city counter-clockwise works most of the time, but if you find a barricade at the end of the first street, turn around and head left and go clockwise instead. You can usually see barricades set up from quite far away. You will come across a few pockets of resistance comprised of various Ascalonians, with the occasional ballista, along the way.

Push through them and enter the courtyard. The middle is littered with ballistae and arrow carts. It's best to draw the crowd of Ascalonians away from the siege weapons, usually by stacking up behind a destroyed statue or a tree at the circle's edge and luring enemies to it. Then demolish the weaponry. Skills that cause blind are invaluable, especially at higher levels where warriors can easily crit for most of your health. After this is complete, a Flame Shaman will join your party to summon a ball of fire.

You will need to defend the shaman from waves of Ascalonians until the summoning is complete. The waves (Cultists and Monks) spawn one at the time, starting at north gates and continue to spawn at each gate clockwise. If the spawn is defeated quickly, another wave will spawn at the same gates.

Once the summoning is complete, the molten rock will barrel towards the large church, crashing the gates down and unleashing Captain Ashym, who will rush to the center of the courtyard.

Ashym has an unstrippable protection boon and gains an unstrippable retaliation boon later in the fight. He also summons a Veteran Ascalonian Squire that grants him stacks of might and deals decent damage. Ashym hits hard, and changes his weapons and skills every 25% or so. If your NPCs are present, it is recommended that the party stack on top of him when the fight first starts so that the NPCs will group on him and attack him. This will enable the party to hit him with a good chunk of damage until he kills the NPCs. You can either slay the squire each and every time he appears or ignore him and simply time your dodges to avoid Ashym and his minions. (It is possible to rally by killing the squire) At quarter marks of his life, or 75%/50%/25%, he may switch to a staff and cast powerful fire spells. He has a large fire wave blast that deals a large amount of damage and applies Agony. In order to dodge this, watch his feet for a small flare and dodge. As Ashym gets close to 25% health, if he has already switched to his staff earlier in the fight, there is a chance he will swap to using a Fiery Greatsword. He stops summoning the Squire and will gain the effect

Growing Rage. It is recommended you only enter melee range when his defiance bar is broken, at this stage. Otherwise, stay far enough away that you can react to his sudden dashes and whirls. Reflects will deal large amounts of damage back to Ashym if timed with his Flame Wave during this phase. Once Ashym falls, the fractal is complete.

This fight is significantly easier if your party brings Crowd Control skills and kills the Squire often. Dodging his Fire Blast skill and being aware of his weapon swaps will also allow this fight to progress more smoothly.

Fractals of the Mists
Retrieved from "https://wiki.guildwars2.com/index.php?title=Urban_Battleground_Fractal&oldid=2393157"
Category: