Twilight Preparations is a tale written by Scott McGough.

Deputy Turma recognized the gang of toughs as trouble waiting to happen. The norn half-drew her sword to make sure it wouldn't stick, then slid it back in the scabbard and marched forward.

As Turma approached the gang's corner, the one-eyed human woman among them jerked her head and muttered, "Heads up. Lionguard."

The rest, all male, followed the woman's gaze.

"Who you let you out of Hoelbrak, little girl?" the dark-haired norn said.

"Indeed," said the second. He was blonde and beautiful, but his eyes were cold and glassy. "I usually like 'em a little smaller, but I would have stayed behind to make an exception for you, darlin'."

"She's a big one, all right" the charr said, swishing his tail. "Nice war paint, officer." He licked his lips as he stared up and down Turma's body, but she knew it was not lust that drove him, but tactics: he was checking her for weapons and gauging if he could draw his first.

"It's 'deputy,'" Turma said. Then she yanked her sword out and rammed the pommel into his throat in one smooth motion. The charr gurgled as he collapsed.

Turma spun and slapped the human woman down with the flat of her blade. She stiff-armed the dark-haired norn, knocking him down beside the charr, and then twisted behind the blonde and pressed the edge of her weapon to his throat.

"Still willing to make an exception?" she hissed. "Darlin'?"

The blonde raised his hands in surrender. The rest of the gang quickly followed suit.

"We didn't do nothing," the woman said.

"Around here, it's not what you do, but what I let you do. Now empty your pockets."

"You heard. Cough it up, all of you. Crime doesn't pay in Lion's Arch, but criminals do. Make a pile. I won't tell you again."

Grumbling, the toughs made a small heap of coins at Turma's feet. She bent and scooped up the booty with practiced hands.

As she drew her drawstring purse closed, Turma said, "This is a big city. Find another part of it to haunt. If I see any of you on my beat again, I won't be as gentle. Now get out of my sight."

Turma watched them go, pained and muttering, as the sound of Lionguard boots approached from the opposite direction. 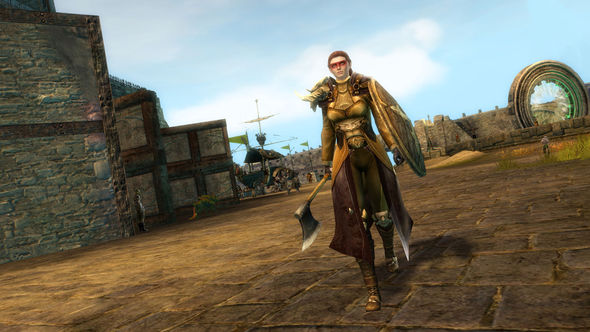 She recognized one of Magnus' toadies but couldn't place the man's name. She nodded and, with her purloined treasure clinking in her purse, marched toward the Lionguard HQ.

As soon as she entered the room, Magnus shouted, "Good! You're here. We've got a line on the Aetherblades, and I want someone with a big ol' mean streak to give them my regards."

Turma's jaw clenched at the mention of the sky pirates. "With pleasure, sir."

"I like that answer. How many friends and colleagues did you lose when they stormed Dragon Bash and zapped Theo Ashford?"

"Then you're properly motivated," Magnus said. "Warden Idon tells us they're setting up in Caledon Forest. I want you to shut 'em down. Shut 'em down, round 'em up, and break whatever they're trying to build. I want them hit hard. And I want it to hurt."

"It'll take some improvisation. The site is still being established, but the security system is up and running. You'll have to think outside the straight and narrow." Magnus smiled sharply. "Think you can handle that? I know how much you like to stick to the rules."

Turma smiled back just as sharply. "I know I can handle it, sir. I just hope they're home when we come calling." 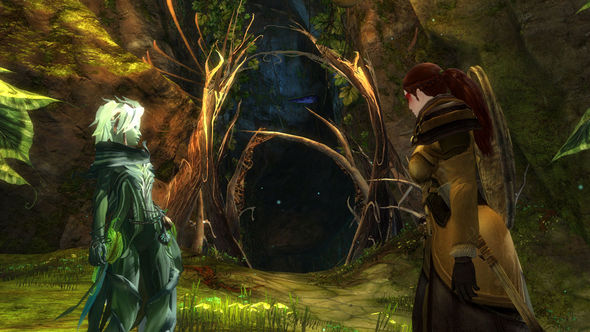 Foreman Spur strode through the Aetherblade shipyard in Caledon Forest. Any sky pirates that weren't engrossed in their duties gave the massive charr a wide berth. Normally, that would have been enough to make Spur's day a little brighter, but today there was no time.

He found Slick and Sparki just outside the main assembly room. As always, they were both fully armored in their specialized rigs, the norn with his oil-spreading apparatus and the asura with her built-in flamethrowers. 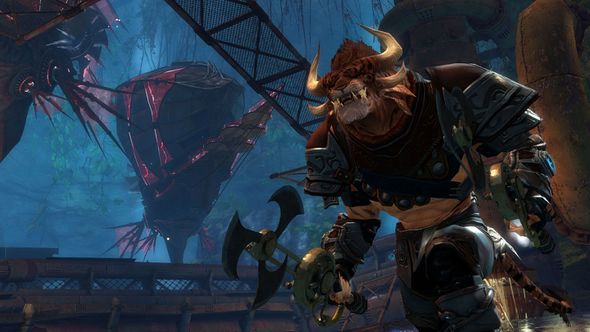 "But they don't run," Slick was saying. "They see what we can do, and they still stand there like we're going to explain things to them."

"They're plants," Sparki said. "Not noted for their rapid response time."

"'We?'" Sparki said. "Slick and I don't have Scarlet trouble. We, my toothy friend, are reliable."

"Reliable's not good enough anymore. We need to be exceptional. Scarlet wants a fleet of airships and an army of holographic pirates to fight alongside the meat variety."

"Though I can't say why the Nightmare Court is," Sparki added. "I'll never comprehend how she got those poisonous peonies to let her have her way with this place."

"Belay that talk," Spur growled. "Scarlet's got some sort of arrangement with the Court. They give her this space for her facility and she helps them...I don't know, make people cry, or whatever it is they do.

"The important thing is we need more ships in the air. If we don't triple our output, she'll be back. And she won't be tossing around insults and orders. She'll be tossing around body parts from the crews who didn't meet quota."

Slick shrugged, clearly unconcerned. "Then crack your whip and get your axes spinning. We're holding up our end. It's your flunkies that are the problem." 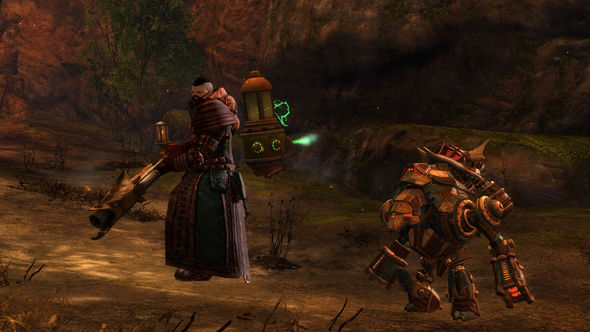 "Indubitably. Slick and I are right on schedule. We've cleared half the new space already. If our mercurial skipper throws a tantrum, it won't be at us."

Spur's whiskers twitched angrily. "Typical. Cover your own tails and leave the rest of us to fend for ourselves."

Sparki made a dismissive sound that sounded even ruder as it echoed inside her helmet. "I'm sorry, is the concept of 'pirate' unclear to you?"

Slick nodded. "Yeah. We didn't earn these suits by caring and sharing."

Sparki rose to her full height and glared defiantly up at Spur. "Anything else?"

"Yeah," Spur said. "My 'flunkies' need Ferndog Backwoods cleared before sunup. They can't work if they don't have the space. Creating space is your job."

"Which we do very well," Sparki said breezily. "And on schedule."

"The schedule's been shortened," Spur said. "And I need to hear you two acknowledge that."

"Acknowledged," Sparki said. "Now go back to yelling at peons and let the elite unit get on with its work."

Spur considered kicking the asura's snotty head right off her shoulders, but that would only create further delays. "We'll finish this discussion later," he said, imagining the very sharp axes that would feature prominently in that conversation. "Send word when the Backwoods section is clear."

He turned and stomped off. Scarlet had left him in charge of the assembly line, and burn him if he wasn't going to deliver.

And the next person who delayed him would find themselves a few limbs lighter before they'd finished their first sentence.