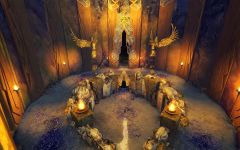 The Hall of Ascension can be found inside the mesa at Augury Rock in Elon Riverlands. It was where the final test of Ascension, defeating a Doppelganger, happened. Previously, it could be only accessed by those who have gained the favor of the Gods by completing the Ascension trials. Now it hosts the Flameseeker Verses, and is guarded by Josso Essher.

Use a Springer to jump up onto the ledge west of the marker. Augury Rock does not need to be open to obtain it, as you can simply approach the purple crystals in front of the entrance, to obtain the point of interest.