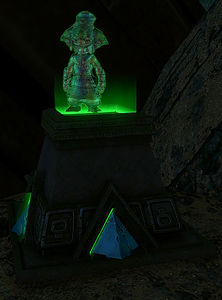 Rata Novus Instructors are holograms found at various stations in Rata Novus. When the city was still inhabited, these were used to test the knowledge of students about the world on the surface. They give a Rata Novus Writ of Excellence upon receiving a correct answer, 10 of which will open the Zinn's Research Supplies chest. Answering 20 Rata Novus Instructors correctly will award the Lore Untangler achievement. The platform the hologram is standing on is initially blue and turns red when a question is asked. If it is answered correctly the platform turns green.

1. From the Rata Novus waypoint, drop into the water. Swim northwest and down to the Instructor.
2. Swim back to waypoint then southeast over rocks and down to the next Instructor.
3. Surface and get on the platform with a Torn Page and bouncing mushroom. Use the mushroom. Take the southwest fork in the path to a Peacemaker Report. The Instructor is behind a rock on the right.
4. From the previous Peacemaker Report, head north up the hill with hexagonal stones. Glide northeast, or alternatively, climb the the hill by jumping against the left wall to find the Instructor.

5. From the First Level, take the bouncing mushroom to the south. The Instructor is to the northeast.
6. Jump down (or glide for ~3 seconds) to the north to find the Instructor.
7. Return to the First Level. Looking down the waterfall, a small shelf is jutting out beneath the large structure on the left. The next Instructor is on this shelf. Glide out and back in for easy access.
8. From First Level, take the mushroom to the south. Glide west out of the waterfall area. As you pass through the arch turn left and land on the rocks. Walk to the southernmost point on that ledge, then go to the character select screen and return. You will appear at the level above near the Instructor. Alternatively, simply use a Springer to jump up the instructor.
9. Walk east and drop down to the rock below. Stay near the south wall and drop down several times to the Instructor at the top of the twin waterfalls.
10. Jump down to the smooth surface covered in writing. Walk up and north to the topmost point. Glide northwest to the LBS. The Instructor is halfway up.
11. Climb to the top of the LBS. Glide north to get onto the UBS. You want to aim for the lowest lip on the left side. The glide is very tight so be sure to aim for the lowest point you can. Climb to the top of the UBS. Drop down to the northeast and find the Instructor.
12. Climb east, then glide southeast to the right side of the high point of the lighted structure. Climb to the aforementioned high point, then onto the rocks. Climb east to the Instructor.
13. Climb southwest. Glide northwest over the UBS, then start looking down for ledges above the flying robots a bit northeast from the waypoint. The Instructor awaits on the ledge.
14. From the highest point on the LBS, glide northwest to pass under the angle arch, and turn due west to meet the Instructor.
15. From the First Level, head west. Aim for hexagonal blocks, but pass over them. Glide further west to the Instructor.

16. From the east end of Rata Novus, go north along a path. When you are heading due south (and are directly north of the Rata Novus waypoint), climb the log on the east side of the passage and drop down to the vista area. A few spiders will delay your visit with the Instructor.
17. Walk southwest past the vista and meet another Instructor.
18. Climb up past #17. Drop off the slope to the east. Continue north until you reach an edge. Impress the next Instructor with your gliding skills.
19. Climb north, west, then south up to the highest point. Glide southwest towards the Instructor. Be sure to aim a bit to the left of the Instructor, as the landing spot is very close to the limit.
20. Walk southeast until you run out of trail. The Instructor is below, and a bit east. Glide out and back in.

Bold indicates a correct answer.
The ** DATA MISSING** have been challenged for their supremacy among the charr.

Located to the southwest of the Granite Citadel, ** DATA MISSING** was home to the Iron Forgeman.

The Iron Mines of Moladune.

After defeating the ** DATA MISSING** in battle, Pyre Fierceshot declared that charr have no gods.

Palawa Joko's forces have been seen outside ** DATA MISSING**, and locals fear an imminent attack.

A human mesmer focusing on love and illusions would be most likely to primarily worship ** DATA MISSING**.

**DATA MISSING** is a well respected blacksmith among the Norn.

The Ministry of Purity.

The bloodline of the Ascalonian king can be traced back to ** DATA MISSING**.

**DATA MISSING** is the longest reigning champion of The Great Norn Alemoot.

Once peaceful cohabitants of Shing Jea, the ** DATA MISSING** have been forced from their homeland.

Once the Spearmarshal of the Sunspears, ** DATA MISSING** took the place of the fallen god Abaddon.

Svanir, also known as the ** DATA MISSING**, was transformed while hunting near Drakkar Lake.

The ** DATA MISSING** were a race native to the Maguuma Jungle. They mysteriously vanished decades ago.

The Canthan ** DATA MISSING** channel the spirits of the dead, summon allies from the void, and were instrumental in the Harvest Ceremony.

The ** DATA MISSING** were a seafaring people prior to their sea being turned to jade.

**DATA MISSING** was the destination sought by Tyrians wishing to reach Ascension.

Used as slaves by the Stone Summit dwarves, the ** DATA MISSING** are subterranean by nature and thus make excellent miners.

Master of the Margonites, ** DATA MISSING** was once the human God of Secrets.

** DATA MISSING** was next in line for the throne of Ascalon, but relinquished the crown to King Adelbern.

The charr worshipped the ** DATA MISSING** as gods until the latter's annihilation.

A Kurzick champion named ** DATA MISSING** aided in the defeat of Shiro Tagachi.

The ** DATA MISSING** plagued Canthan lands for years before finally being destroyed.

**DATA MISSING** led the charr invasion that led to the near destruction of Ascalon.

Dagnar Stonepate, leader of the Stone Summit rebellion, met his end in an epic battle at ** DATA MISSING**.

The Iron Mines of Moladune.

The Ice Caves of Sorrow.

Following the conclusion of the Krytan Civil War, ** DATA MISSING** became the reigning monarch of the kingdom.

The ** DATA MISSING** are scythe-wielding holy warriors that utilize enchantments in combat.

West of Borlis Pass, ** DATA MISSING** is the location where Prince Rurik met his untimely demise while trying to save his people.

The northernmost kingdom in Elona, ** DATA MISSING**, is known for its great wealth and culture.

Independence, strategy, and laughter in the face of danger.

Loyalty, ferocity, and strength in numbers.

The Charr used a magical ** DATA MISSING** to cause the Searing to reign terror in Ascalon.

Purportedly to stop the advancing charr, ** DATA MISSING** was responsible for the Cataclysm that destroyed his homeland.

Guarded by the undead dragon Rotscale, ** DATA MISSING** is the final resting place of generations of Krytan nobility.

Temple of the Ages.

The death of ** DATA MISSING** caused the Jade Wind that devastated the southern portion of Cantha.

South of the Tarnished Coast, ** DATA MISSING** was the location of the battle between the mursaat and the Titans.

Isle of the Nameless.

The Ring of Fire Islands.

The ** DATA MISSING** of Elona are often used as slave labor, though many strive to change that.

Once the human god of death, ** DATA MISSING** now sits imprisoned in the Hall of Judgment, deep in the Underworld.

Upon getting a question correct:

Upon getting a question wrong:

Interacting again after getting a question correct:

Interacting again after getting a question wrong: