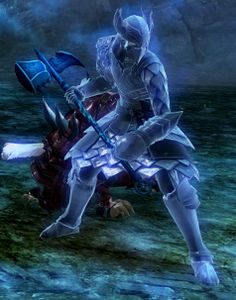 Filthy animals! You will regret this!

Duke Barradin was once a renowned duke of Ascalon. After being turned into a vengeful ghost by the Foefire, he haunts the ruins of his old estate and continues to fight against the charr who now populate Ascalon.

Duke Barradin, descendant of King Doric, was considered one of Ascalon's most notorious dukes and a renowned warrior, with some even calling him a poot diplomat due to his rather straightforward manner of addressing nobility and commoners alike.[1] His brother was the second to last king of Ascalon who peddled influence to guilds for the slightest show of coin and involved Ascalon in the devastating Guild Wars as a result. The duke himself appointed the promising soldier Adelbern, leader of the Ascalon's Chosen guild, as the commander of the army after the Battle of Rin.[2]

When the royal family was assassinated during the Third Guild War, Barradin was the first in line to the throne. However, he did not object when the people called for Adelbern, who had successfully defended Ascalon, to be king instead.[3][4] The duke spent his life on the Barradin Estate, making wine and training warriors. However, some Barradin loyalists disagreed with Adelbern's crowning and became rowing bandits known as the Royalists whose mission was to harass Adelbern's supporters and place the duke on the throne. By 1070 AE, the threat the Royalists posed was great enough that Devona asked local adventurers to investigate whether people at the duke's estate were actually showing signs of disloyalty towards Adelbern's regime and if Barradin was supporting the Royalists' actions. These investigations ultimately revealed that Barradin and others at Lakeside County were fully loyal to the crown, thus putting an end to rumors of high treason.

During Adelbern's regime, Barradin's daughter Lady Althea was betrothed to Adelbern's son Prince Rurik.[3] However, Ascalon was attacked just shortly before their wedding in 1070 AE, and Althea was captured and sacrificed by the charr in one of the Flame Temples in 1072 AE. Althea's ghost remained restless until a renowned hero returned her ashes to the devastated duke.[5]

In 1078 AE, the charr had advanced deeper into Ascalon and were threatening the capital. When Barradin led the defense from Diessa Plateau, the charr captured him and Farrah Cappo and placed them in cells at the ruins of an old temple. The hero and Gwen Thackeray happened upon the pair during their trek through the lowlands and rescued them, informing Barradin that the Ebon Vanguard still existed in the north much to the duke's surprise. The hero and Gwen managed to defeat Dahgar the Eye of Flame, the charr leading the latest assault on Ascalon, earning Ascalonians some time to recover before the next charr attack.

Barradin died in 1090 AE when he was caught in the Foefire unleashed by Adelbern when the charr had breached the last defenses of Ascalon City. The spell turned him and other Ascalonians into vengeful ghosts set on exterminating charr under the now spectral king's orders. Barradin began haunting the vaults of his ruined estate and caused regular trouble for the charr in the now charr-controlled Plains of Ashford.

As a ghost, Barradin was the leader of the largest scale ghost assault in recent history when he stirred them to attack the Village of Smokestead in 1325 AE.[6] Tribune Rytlock Brimstone and a collection of charr soldiers, including a soldier who would later become known as the Legionnaire, managed to turn the tide of the battle and defeat Barradin who, as a last resort, possessed a statue to fight them. However, the victory over the ghostly duke cost the lives of nearly every member of the Legionnaire's warband as Barradin caused the crypts to collapse and crush anyone inside.[7] Rytlock and other soldiers speculated that it would take weeks for Barradin's ghost to reform, allowing the charr to rebuild their perimeter in the meantime.[8][9]

After dying in the rogue god Balthazar's ambush in 1330 AE, the Pact Commander's soul appeared in the Domain of the Lost where all spirits which experience sudden, violent deaths end up in. While recovering their name and remembering their purpose to be properly judged, the Commander was subjected to fragmented visions of past deeds, including the encounter with Barradin if the Commander was a charr.