Evon Gnashblade Disembarks is a tale by Angel McCoy.

Evon Gnashblade stood at attention before Legionnaire Aria Gnashfang along with the other members of his warband. An uneasy silence hung in the air between him and his superior.

"Why haven't you done what I asked, soldier?" Gnashfang growled. "You understood my orders, didn't you?" She moved in close to Evon, snout to snout, until they were breathing the same air.

It was suffocating. Evon lifted his muzzle higher. "Permission to speak freely, sir."

"Oh, this ought to be good. By all means, speak your mind."

Evon sensed the shifting of the others in his warband, moving away. He experienced a feeling of superiority; their withdrawal was cowardice. It further solidified the conviction he'd been pondering for days, ever since he'd first heard his legionnaire's orders.

Evon had been a good soldier during all twenty of his years since birth. He'd excelled in the fahrar, drawn the attention of the most prestigious officers in the Ash Legion, and had never once questioned orders—until that very moment. He chose his words carefully.

"I'm not sure this approach will have the outcome you wish, legionnaire."

Gnashfang snarled. "You're not sure? Well, let me assure you. If it doesn't, my blade's coming to look for you. You understand what I'm saying?"

"Sir," Evon tried again, speaking quickly before Gnashfang could smack him down, "the people of Lion's Arch won't respond to threats. They have to feel they're getting something in return for their investment. These aren't stupid farmers. They come from pirates, but they're a community now. They value trade and cunning. Your intimidation strategy is unsound. It's not the Ash way." His air ran out, and he had to take a deep breath.

One corner of Gnashfang's lip twitched upward, revealing a long, white canine tooth. "Oh, they'll pay for protection all right, or we'll make them wish they had. Get out of my sight before I change my mind about letting you leave alive."

Options coursed through and collided in Evon's thoughts. He had several available to him, but the one thing that never entered his mind was doubt. He made his decision about how to proceed. 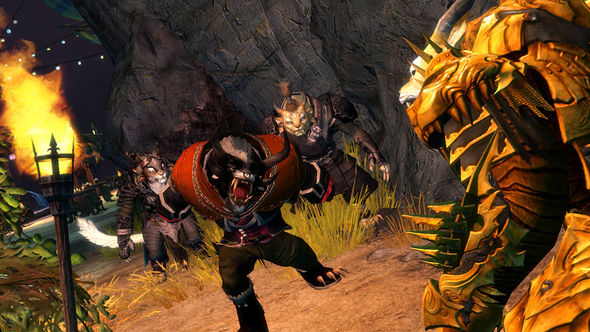 Evon snorted through his nose. "I can't allow you to pursue this path. I won't help you extort the people of Lion's Arch. It's not the way to establish a foothold here." As he spoke, the vein in his neck began to pound. His arms relaxed at his sides, hand touching the hilt of his dagger. His awareness expanded; his peripheral vision broadened.

Gnashfang couldn't let the insult go without a comment. Through gritted teeth, she said, "I don't care what you think, wurm-nugget. You just resigned the warband—permanently."

With an impressive sweep of her arm, Gnashfang pulled her sword from her scabbard and swung it toward Evon's head.

With a quick double-step, he put his body inside his legionnaire's reach and blocked the sword swipe. With his free hand, he latched onto one of Gnashfang's horns, pulled downward and stepped back, putting his own weight into the move. Then, he drove his dagger deep into Gnashfang's neck and jerked it out along the spine.

The sound of the sword clattering to the stone floor freed the Gnash warband from their shock, and they rushed to pull Evon off their legionnaire.

Evon stepped back and watched as they lowered Gnashfang to the ground, knowing full well that it was too late to save her. He waited, blood dripping down the blade of his dagger onto his hand.

When the others finally turned to look at him, he stood his ground.

"I'm legionnaire now," he said. "You'll do as I say, or join Gnashfang in the Mists. Any arguments?"

Not all members of the warband shook their heads, but none expressed an objection either.

"Good. Give her an honorable pyre tonight. Tomorrow, we establish the Black Lion Trading Company—properly."

The warband hefted Gnashfang's body and carried it out. Evon didn't move until they were gone and unable to witness his slow slump down the wall to sit on the floor. He focused on breathing. He would have been dead if Gnashfang hadn't underestimated him. But, his risk had paid off. The Black Lion Trading Company was his. 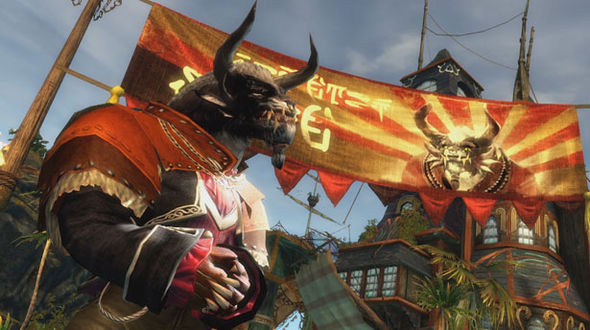