Run southeast from the 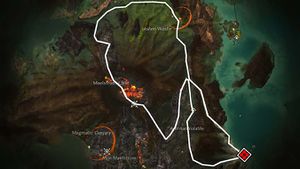 To begin with, avoiding obstacles and speeding up at the right times is essential. Speed up your beetle at the slope, after the second checkpoint. Use it again as soon as it gets off the cooldown. For the next parts, be aware of the rocks on the grounds and go around them. When you reach the checkpoint that requires a sharp drift to the right, slow down and lean a bit — if you are too fast or drift too late, you might vault into the air, skipping the next point, which requires you to backtrack — so be careful. Once past that, you can speed up again until you reach the cave. You have enough time to make your way through it carefully, until you reach the speed buff. Speed up then to avoid getting stuck in the lava terrain in the Megadestroyer domain. After this, you'll drift through a smaller cave again — keep to the left and aim for a post structure else you might lose some time crashing into the walls. As soon as you clear this part, you may speed up again while avoiding further obstacles. Drift to the right and stay on track until the finish line.

Time Trial: You can practice the course while the race is being set up. Ready to set a new lap record?