Prove you have what it takes to roll with the beetles. — Adventure objective

Prove you have what it takes to roll with the beetles.

Roller Beetle Training is an adventure in Allied Encampment in which the player needs to roll through all the rings as fast as possible.

This adventure requires you to be on a Roller Beetle Mount in order to attempt it.

Run north from the

Press [V] or [Space] with full energy to quickly accelerate. 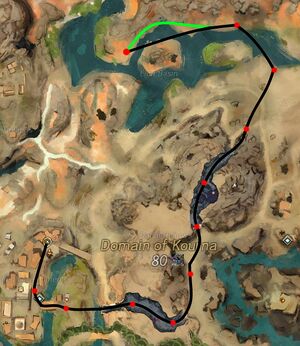 The objective is to guide your mount through the rings in sequence. The adventure ends at the final ring and you will be guided between each ring with a self-correcting glowing trail. Your endurance bar will refill every time you reach a ring, allowing you to chain speed boosts on your roller beetle. Being dismounted does not instantly end your run, but will likely cost you a placement time due to loss of time and momentum.

You can get a free boost at the beginning by waiting at the start while mounted before beginning your run. Be careful when timing boosts as passing a ring while in the process of boosting may not provide a recharge. Utilize the "Mount Ability 2" to drift around tight corners when at high speed to avoid crashing into walls and also to regain some endurance. The Dabiji Hollows area has several tight corners and narrow corridors so time your boosts and drifts carefully. When exiting the tunnels past the Awakened Inquest (around Pogahn Bluffs Proving Ground), hug the right wall and be ready to boost in order to hit the rock ramp correctly and not miss the floating ring. This is the only tricky ring in the run. In order to go over the water near the end you'll need to be at a particularly fast speed, alternatively you can through the green route showed on the image. Some segments in the track propel you in the air so it is possible to regain endurance with the Big Air mastery, but be careful as not completing your trick will cost you precious endurance.

First turn on bridge (first time only)
Gorrik: Oh, and you should be able to slide into turns and accelerate out. I believe the kids call it "drifting". SO exciting!
Gorrik: I meant to tell you, Commander: when Petey accelerates, his inertia expands his turning radius. (if you fall off bridge)

Leaving the Inquest tunnels (first time only)
Gorrik: Remember, Petey's a roller beetle, not a jumper beetle. If you get blocked, look for something you can use as a ramp.

Completing the adventure
Gorrik: Not too shabby, Commander. I think Petey likes you!