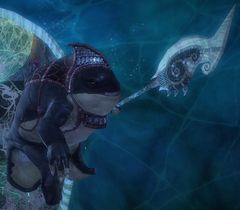 OooOOOooo... quaggan must be brave.

Shashoo is a quaggan from the quaggan refugee village of Falooaloo. Asura, human, and sylvari players can ally with her if they choose to aid the quaggans as part of their personal story.

After Zhaitan's defeat, she was part of the Pact fleet that was destroyed in the Heart of Maguuma, however when all the higher ranked officers from her ship died, she became in charge of the The Ordnance Corps Outpost as the highest ranking officer.

Section-stub. This key section of the article is incomplete. You can help the Guild Wars 2 Wiki by expanding it.
Reason: Missing events

Attack the Mouth of Mordremoth's head while evading its attacks (80)

Attack the dragon's body while evading its attacks (80)

In Dragon's Stand, when landing on her island first
Chief Officer Shashoo: Good of yoOo to join quag—to join me.

In Dragon's Domain, after killing the Mouth of Mordremoth
Chief Officer Shashoo: I am honored to fight alongside yoOo, Commander!
<Character name>: The honor was all mine.

Anomaly:
Normally she can be found with other quaggan NPCs, including Varonos Narrijoo and several Quaggan Hatchlings. However in the asuran and Sylvari home instances she appears alone.