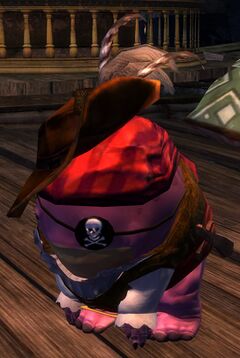 "Pirate" is a young quaggan who is dressed up for Halloween. During Halloween she can be found wandering about the Lion's Arch exchanging Pieces of Candy Corn for Child's Trick-or-Treat Bags and in Caledon Forest watching "Mad King Thorn" performing.

Section-stub. This key section of the article is incomplete. You can help the Guild Wars 2 Wiki by expanding it.
Reason: Missing dialogue to give them candy corn and get bags back

In Caledon Forest
Yarr! Don't be scared. Quaggan isn't a real pirate. It's just for play. Quaggan is going on lots of adventures and getting lots of treasure! Treasure is candy.

Have a good Halloween.

Only in Lion's Arch