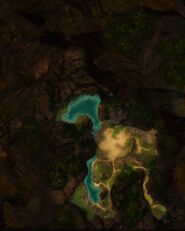 Special Forces Training Area is a training area built in a cave system beneath Lion's Arch. Players can summon golems, add or remove boons, conditions, and effects and check their own DPS.

Using the portal in Lion's Arch Aerodrome. Players must be in a raid squad to enter the portal, which requires either the Heart of Thorns or Path of Fire expansion. Additionally, players can be in a squad by themselves.

Technician: Welcome! Feel free to approach the console and begin combat practice. If you have any questions, I'm all ears. Ha!

Technician: Hi there! Use the console to begin combat testing. If you have any inquiries, come speak to me.