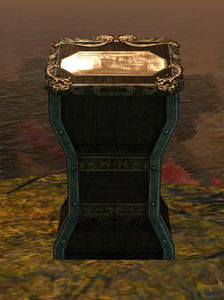 Marriner Plaque are twelve plaques around Tyria set up by Cassin Hoppal for players to discover, each detailing an important moment in Cobiah Marriner's life. They allow players to follow in the footsteps of the founder and first Commodore of Lion's Arch and learn more about the history of the city. Eleven of the plaques are located in Lion's Arch, while the final plaque can be found in Malchor's Leap.