Box o' Fun is a magical chest that contains many random effects to entertain the masses. Wherever you use the box an

activity symbol will appear on the map so that other players will notice the box. It can be obtained from various sources and gives the player 10 times a random skill bar or transformation. 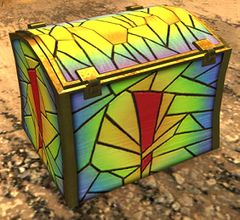 To change the settings of their Box o' Fun, the owner can interact twice with the box to receive an adjuster, which looks like a Cavalier Hammer and has two skills.

Using the Adjust Box of Fun skill, hits the Box with the adjuster and gives you the following dialogue

Set it to only change colors.

Set it to celebration mode.

Set it to only transform appearances.

Set it to petrify mode.

Set it to travel-toy mode.

Selecting a dialog option will switch the box to the selected mode for 2 minutes. After 2 minutes have passed, the box will close and provide the opportunity for a random mode when re-opened (unless the owner uses Adjust Box of Fun to assign the box mode once more).

An icon will appear over the Box o' Fun indicating which effect it will cause when interacted with.

The player gets transformed and is able to participate in Costume Brawl. Possible transformations are:

Interacting with the Box o' Fun will show you the following dialogue:

This box appears to be full of temporary travel toys.

Choosing a travel toy will give you 15 minutes of

Temporary Travel Toy and 3 hours of the corresponding automatic effect.