This article is about a siege weapon. For the animal, see Ram. 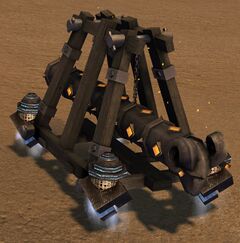 A flame ram is a siege weapon that is used to break down gates. The low monetary and supply costs and high damage to gates make them the obvious choice for attacking fortifications, but their close proximity to the gate makes them vulnerable to attacks from enemy players, and also from fortification defenses such as the gate's Burning Oil.

Rams only work on gates; they are ineffective on walls. They have a range of 360 units and an AoE target cap of 50.

The three second fear caused by Flame Blast also makes some defensive uses possible, for instance placing the ram at choke points to temporarily disable enemies that try to run through.

Regular flame rams are built with Flame Ram Blueprints, which can be bought from a Siege Master for either 6

to build (50 total). They are built with Superior Flame Ram Blueprints, which are made in the mystic forge or obtained from certain containers (e.g. Boxes of WvW Supplies).

Guild flame rams are functionally the same as Superior Flame Rams, but they also display the emblem of the owner's guild. They are built with Guild Flame Ram Blueprints, which are fabricated by a Scribe and require 40 supply to build.