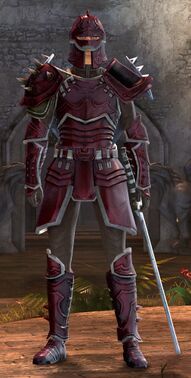 Captain Ashym is a legendary boss found at the end of the Urban Battlegrounds Fractal. He will have a permanent protection boon on him and gains a permanent retaliation boon as the fight progresses. He will occasionally summon a Veteran Ascalonian Squire, which will constantly grant might to Ashym, up to a stack of 20. At some points, Ashym will swap his sword for a staff, using powerful fire attunement-based spells, before switching back. Defeating Ashym will complete the fractal.

Section-stub. This key section of the article is incomplete. You can help the Guild Wars 2 Wiki by expanding it.
Reason: Missing some FGS skills (specifically his ranged attack), missing staff flame burst skill (fire/agony explosion signaled by a spark at his feet) Verify Growing Rage and weapon phase mechanics. Sometimes he doesn't summon an FGS?