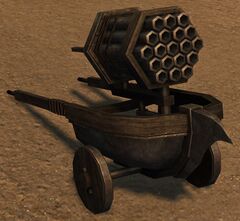 An arrow cart is an area denial siege weapon that fires a spread of arrows with a maximum range of 2,500 units and an AoE target cap of 25. They are most effective against players and NPCs and can deal some damage to other siege weapons and gates, but deal no damage against walls. Arrow carts are both common and cheap, and can often be seen used in offensive and defensive manners. Their attacks do AoE damage over multiple ticks, creating persistent areas of denial which are difficult for players to stand or build siege in. They require line of sight, and their damage extends through gates.

Players can only be damaged by arrow cart attacks every 0.5 seconds and the damage of arrow cart skills is reduced by 50% against enemy siege weapons.

Regular arrow carts are built with Arrow Cart Blueprints, which can be bought from Siege Masters for either 6

(50 total) to build. They are built with Superior Arrow Cart Blueprints, which are made in the mystic forge. They apparently do not require line of sight (possibly a bug).

Guild arrow carts are functionally the same as superior arrow carts, but they only cost 40

to build and also display the emblem of the owner's guild. They can be built with Guild Arrow Cart Blueprints which can be crafted by a Scribe (requires 200