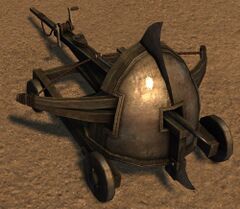 A ballista is a World vs World siege weapon that fires large bolts to pierce a target with a maximum range of 3,000 units and an AoE target cap of 10. It is highly effective against individual players, small groups and siege weapons, but less so against larger groups and other siege targets.

Ballistae have two primary uses. The high area damage to players of Shattering Bolt and Spread Shot makes them excellent for controlling choke points such as the entrance to the lord's room in Hills, and the high damage to siege weapons of Reinforced Shot makes them useful for destroying defensive siege on structures, or for quickly taking down an attacking enemy's siege.

Ballistae require line of sight, and can easily be blocked by the ground or by parapets on the edge of structure walls, depending on the elevation of the target. As such they will often be built on the very edge of walls, making them vulnerable to attacks from enemy players.

Regular ballistae are built with Ballista Blueprints, which can be bought from a Siege Master for either 10

. Once deployed, they require 30

(40 total) to build. They are built with Superior Ballista Blueprints, which are made in the mystic forge.

Guild ballistae are functionally the same as superior ballistae, but they also display the emblem of the owner's guild. They require 30 supply to build. They can be built with Guild Ballista Blueprints, three of which may be purchased for 12

from a Guild commendation trader or crafted by level 200 Scribes.

Bug:
Skills 3 and 4 recharge on both a per-ballista and per-player basis. When a player uses a ballista where the skill is recharging, the player's version of the skill is set to the current recharge of the ballista's
Siege weapons and blueprints