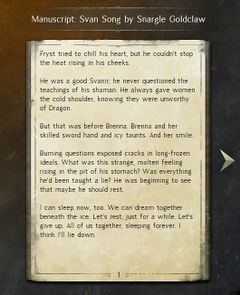 Fryst tried to chill his heart, but he couldn't stop the heat rising in his cheeks.

He was a good Svanir; he never questioned the teachings of his shaman. He always gave women the cold shoulder, knowing they were unworthy of Dragon.

But that was before Brenna. Brenna and her skilled hand and icy taunts. And her smile.

Burning questions exposed cracks in long-frozen ideals. What was this strange, molten feeling rising in the pit of his stomach? Was everything he'd been taught a lie? He was beginning to see that maybe he should rest.

I can sleep now, too. We can dream together beneath the ice. Let's rest, just for a while. Let's give up. All of us together, sleeping forever. I think I'll lie down.

Anomaly:
The second page is empty.