Those Sneaky, Sneaky Skritt is a tale by Ree Soesbee.

The oldest asuran writings tell of the deep lands far below the surface of Tyria. Their lore describes beasts that no human or charr has ever known and gives histories of places now thought destroyed forever by the rise of Primordus, the Elder Dragon. These scrolls also speak of monsters fell and dangerous...and other creatures, perhaps not as dangerous, but horribly, wickedly tricksy – the skritt.

Watch out for the skritt. Oh, one is amusing enough, but imagine two...or twenty...or two hundred of the blasted things! No, you'd better exterminate the entire colony of them now and be done with it—before things get out of hand.

Skritt are small, rat-like creatures in Guild Wars 2 who come from deep beneath the surface of Tyria. At first glance, these skittering fur balls may seem barely capable of rational speech, but they wield weapons and wear clothing and armor like more advanced races. Also, as the asura will tell you (or as any careful observer might note), the skritt actually gain intelligence when many of them congregate. Speaking in chirps and squeaks so fast that it sounds like buzzing to human ears, they share information, parse knowledge, and determine actions between themselves. The more skritt there are to do so, the more rational, intelligent, and cunning their activities become. One skritt alone is a simple-minded individual, capable of performing basic tasks and keeping himself alive, but an entire colony of hundreds? Clever enough to challenge even the brainpower of the asura.

The asura see the skritt as moochers. They don't plan, they are not strategists beyond small tactics and survival techniques, and they are quick to take advantage when they see an opening. They are neither inventors nor scientists, but they are curious. Given enough time with someone else's invention, a skritt will discover how it works—and possibly how to replicate it. That alone is enough to annoy the asura beyond reason.

There are those among the humans who laugh at the asura's rabid belief that all things skritt must be eliminated; how could a race as evolved and powerful as the brilliant asura be afraid of rats?

Arrgh! Did I not tell you? Do not walk—not walk—on ice! Fall! You! Cold! The surface is different than below! 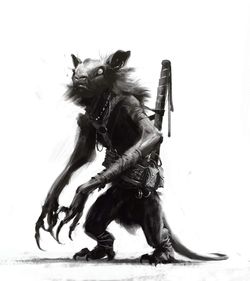 The skritt and the asura have long been enemies, beneath the surface of the world. Fighting over territory and resources for generations, the two races have perpetually been at one another's throats. Commonly, the asura had the advantage—an asura, after all, is every bit as smart when alone as she is when she is with others—but the skritt reproductive cycle is faster, allowing them to retain their numbers even as the asura eradicate them. This leads the asura to massacre skritt as rapidly as possible, arguing that if they didn't, the skritt would quickly overpopulate and be a massive threat to the civilized world.

When Primordus rose beneath the earth, driving the asura to the surface, the skritt also fled to the lands above. Unfortunately, they were not as successful as the asura in doing so. Packs of skritt (or individuals) separated from the body of the fleeing group would too easily lose their way or make poor decisions, ending in their destruction by Primordus's destroyers. Therefore, fewer skritt survived to colonize closer to the surface. For a while, the asura believed their ancient annoyance had been destroyed—a single bright spot in the rise of the Elder Dragons. However, within a few generations, they discovered instead pockets of skritt resettling throughout Tyria.

Since then, the asura have renewed their war against the skritt, entreating other races to eradicate their furred enemy as well. Some races (such as the charr) are more than happy to do so, seeing the skritt as a pest to eradicate. Others, such as the humans and the sylvari, are more willing to talk to the skritt and make alliances. The skritt are often eager to do so, and more or less trustworthy...as long as they stay in a group large enough to provide sufficient brainpower to remember the conditions they agreed to respect.

Warriors among the skritt are called skean dhu. An apt student will note that the words literally translate to 'any skritt holding a weapon.'

— Rava Skrittcoat, lecturer at the College of Dynamics

The skritt naturally evolve a leader as they begin to gather permanently in one place; that leader is usually chosen for his or her ability to most rapidly parse the information brought by other skritt. The rest of their race at that location respect the leader as something of a first-among-equals, allowing that individual to choose future strategies and plans for the entire colony. The entire group gathers en masse at least once every moon (usually on the full or new moon, as it is easiest to note) in order to share large-scale information. They commune, discuss the events of the past month, and prepare for any difficulties they know to be approaching during the next moon.

Although skritt love to take objects for their own, they do not prize jewelry or useless items, nor do they decorate themselves with shiny objects. Such things can only bring harm to a skritt who is trying to be sneaky! Instead, they prefer useful objects, items that give them an advantage in hunting or other work, or things that they are incapable of making for themselves. 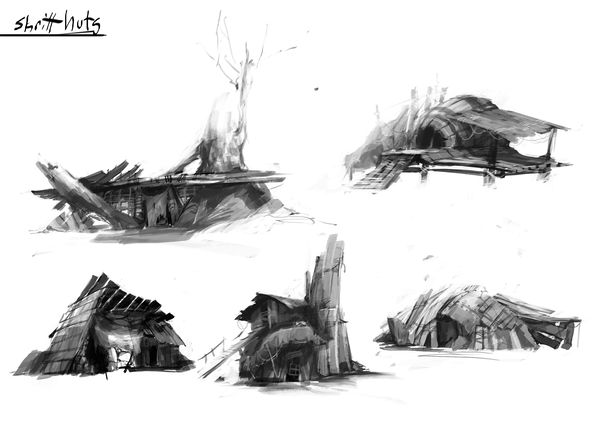 Skritt Religion (such as it is)

Seek it and find. Do not look. It is not; therefore, you should 'not-look' with care. Yes?

The skritt have only a faint sense of faith—more a sense of empathy for the world than a belief in a divine source or power. Skritt feel that life exists simply so that one can have pleasant times and good memories. They are hedonists and are willing to gain their comforts from someone else's labor. They are scavengers, but picky ones. They're not the sort to dig through your trash, but rather the kind of mooch who convinces you that your extra sword is too much trouble to carry and you should give it to them. They do have a sense of material value, and prefer shinier, more advanced items. In time, skritt will likely break anything they've been given and come sniffing around for newer and better items to acquire.

The Ecology of the Skritt

The skritt are sneaky, intelligent scavengers who resemble a humanoid cross between rats and bats. They are omnivorous, preferring cooked meat and harvested fungi from the underground. Skritt are far too lazy and self-absorbed to run sufficient farms, except for those that require next to no work on their part. They prefer to live in large hollows or caverns, known as "scratches," using rocks and underground passageways to build a safe environment. They do have architecture, and build huts or structures within the main area of their hollow out of the items they scavenge. There is no societal distinction between male and female skritt. Only the asura, who have generations of interactions with this race, can easily tell the difference between the two genders. To other races, all skritt look very much the same. 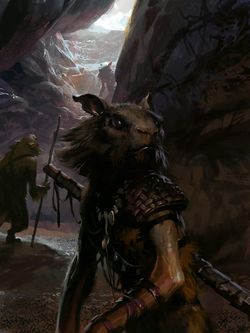 No one really knows how the skritt hive-like intelligence works. The most likely theory is that the skritt simply communicate so rapidly that, when together, they can vet their ideas and choose the best one within seconds, rather than going with whatever plan each individual first conceived. Certainly, the skritt have exceptionally sharp auditory skills. They can communicate with one another almost instantly if they are within earshot. If you meet one skritt alone, he might not appear particularly intelligent, but if you meet several, they can discuss their surroundings in amazingly swift, almost ultrasonic chirrups and chitters, and are able to process information and make more intelligent decisions. Therefore, the skritt seem less intelligent in small groups and more intelligent when they gather in larger ones. Because of this, the skritt in their scratches are the most intelligent—and possibly the most dangerous. Even the bravest asura hesitate to attack a hollow when it is filled with skritt.

Female skritt may give birth to litters approximately three to five times in their lives. These litters rapidly become self-sufficient and move out to live on their own. However, due to the nature of skritt intelligence, young skritt occasionally wander off alone and find themselves without the chittering of others to help them in dangerous situations—thus the overall population remains relatively small. Skritt mothers and fathers care a great deal for their children, and pamper them with the finest objects that can be bought, bartered for, or stolen.

Skritt have some difficulty communicating with other species. Due to the unique method of their race's interpersonal communication, skritt often simply assume you know what they're talking about. They also assume that you have the ability to keep up with their fast-paced idea transfer, and will speak rapidly and without specifics—because another skritt would simply understand without needing those details. Skritt also occasionally get over-excited and repeat themselves to make sure the "slow-witted not-skritt" actually understand them.

The skritt are a new species in Guild Wars 2, and their creation came from brainstorms about the effects of Primordus's awakening. We'd already talked about the asura coming to the surface, but when we started to think about what the underground world must have been like for the asura, we concluded that the asura couldn't have been alone down there. Other creatures, like the dredge, must also have been affected by the Elder Dragon's aggression.

We hadn't explored the idea of a hive-mind in our world before, but we didn't want to just repeat the old standard—an insectoid race. We went through many ideas, and eventually settled on the concept of a rattus rattus based horde. A major consideration in their creation was that this race had to challenge the asura on their own terms, but not be just another super-intelligent species. We wanted them to have weaknesses, flaws, and differences—as well as strengths.

We had a quest chain that involved skritt at one point; although it didn't make it into the game, it was a fascinating story. A small colony of skritt came upon a tribe of kodan and listened to the kodan philosophy. As a group, they were able to understand it very well, and one of them was impressed and wanted to learn more. The other skritt left the area, but that one stayed behind to study with the kodan. Unfortunately, once the other skritt left, he found himself in a terrible position—he was no longer intelligent enough to understand the kodan philosophy or remember why he idolized them so much. The feelings remained and he stayed with the kodan—but, tragically, he would never be able to truly understand them. It was GW2's version of Flowers for Algernon. I hope that one day we'll be able to put that tale in the game.