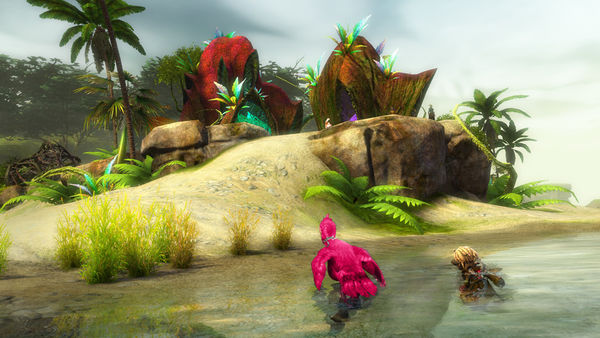 At this year's MomoCon, Narrative Director Leah Hoyer and Narrative Designer Ross Beeley hosted a panel on the fundamentals of narrative design for Guild Wars 2. With help from the audience, they created the basic concept for Vikki, a new character on a journey to save her moa, Momo—and possibly to find adventure along the way.

"The Weeping Isle." I hesitated at the head of the footpath, uneasy about leaving the open road. "What an awful name."

"Squork," Momo replied, ruffling her feathers. She was distracted by the jellyfish swimming sinuous loops around fishing nets and seaweed, and she didn't seem as apprehensive as I was about approaching the home of the Soundless. But we needed directions and supplies, and I wanted to avoid Mabon Market—and the asuran researchers there—if I possibly could.

The Weeping Isle was a lot like the other sylvari settlements we'd seen on our way through Caledon Forest, but weathered by wind and open water. A chime made of flat shells and reeds hung from a doorway, jangling in the warm breeze. The sky was clear, and the waves calm. It didn't look like a place to weep at all; it looked like a place to take a nap. At a closer look, though, there were deep scars on the petioles of the nearest broad-leafed house, as though someone had taken a hatchet to it. The path to the little island was trampled with messy footprints. And it was very, very quiet.

Most of what I knew of the Soundless I'd heard secondhand and wasn't good. They'd brought the Pact fleet down in the Maguuma Jungle, some people said. Or they'd all risen up as one and marched north to join the jungle dragon's armies. All of that was demonstrably untrue—I'd even seen one in Rata Sum not long ago—but how should I approach them? Should I be friendly? Or somber and quiet?

Momo trilled, rising up on her toes the way she does when she's happy to see someone. I turned to the road to see what she was looking at.

The tallest sylvari I'd ever seen was walking toward us, on a course for the isle. She was all brown and green, with sweeping, fernlike hair, and she was as broad as a tree. "A visitor," she said when she saw us, and brushed past me and Momo, putting herself between us and the Weeping Isle. She knelt in the middle of the path, slid her rucksack from her shoulder, and started to unpack. "Fruit? Tools? I can sell it all to you, right here at the roadside."

Something in her voice made me hang back. I didn't sense any danger—and Momo was chirping inquisitively—but it reminded me of when I'd had to make unannounced calls on senior researchers. I was welcome at the door, but no further.

"Do you live here?" I blurted out.

The sylvari gave me a wary look. "Tools? You'd better be prepared, if you're going very far. Are you with the krewe?"

"Over there." She waved a hand in the direction of Mabon Market. "They said they were going to research the fire island. Does that mean anything to you?"

"No." I pondered. "The only place I can think of like that is south. Way south. I'm only going to Queensdale."

The sylvari unrolled a thick reed mat and laid out gathering tools, red apples, and a big chunk of spikefruit wrapped in a leaf. The apples caught Momo's eye; she bobbed her head and peeped at the sylvari.

Momo made the tiniest, most pathetic, hungry-baby-bird sound and shoved her beak right under the sylvari's hand. The sylvari's eyes went wide, and then she laughed. "She seems very used to strangers," she said. Something in her rough face softened. "You and I, though, perhaps not. Deiniol."

It took me a tick to realize she was offering her name. "I'm Vikki. And this is—"

"Momo, yes." Deiniol patted her, then offered an apple on the flat of her palm. Momo ate it in one big crunch.

"Is that all right?" I was worried about my coin.

"Free, since I gave in to begging." Deiniol swirled her hands in the water to wash off the apple juice. "What's in Queensdale?"

"Moa experts. Momo's sick—maybe. I'm not sure." I wavered. "She needs a checkup."

"She looks healthy enough to me. There are pink moas nearby, but Momo has the grandest beak I've seen."

Well! This was a topic I could sink my teeth into. "That's because she's not really a pink moa. I mean, she is, but not by taxonomy. She's a black moa with dilute coloring."

The progeny I'd walked through this were usually either way ahead of me and just wanted to play with Momo or bored of the entire thing, but Deiniol seemed impressed. "Where did you find such a magnificent bird?"

"Oh." Of course, I thought Momo was magnificent, but... "Nobody else wanted her."

"Really? Even for her lovely color?"

Momo preened. Sometimes I'm dead sure she understands the common tongue. "Variation in avian pigmentation is already well documented, and she stands out too much for a serious ranger," I said.

Deiniol gave me a long look. "Why did you want her?"

"I like pink. And when I picked her up for the first time, she fell asleep under my chin."

I smiled back, ducked my head, and managed to mumble something polite. In the end, I bought all of Deiniol's apples—but they were very good apples.