This article is copied verbatim from an official source. Accordingly, please do not correct any typos or other errors before verifying that they do not exist in the original article.
Spoiler alert: The following text contains spoilers relating to Living World Season 1.

Lionguard Security Force is a collection of reports written by Magister Ela Makkay during the Battle for Lion's Arch. 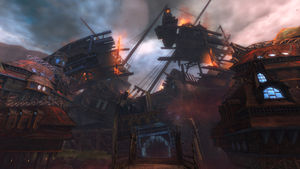 As they gather at the Gendarran Fields entrance to Lion's Arch, a recent recruit to the 14th Lionguard Security Force shows me a tattoo popular with the group. The words on his skin capture their goal now: "The Arch or nothing"

Today, the 14th will attempt to be the first squadron to establish a foothold in the battered, occupied Lion's Arch.

Their mission is simple, yet dire: breach the city and hold Trader's Forum until reinforcements arrive, whenever that will be. Given how Scarlet's forces are entrenched in the city, Lionguard Command does not expect the 14th to last through the night. Despite this, they volunteered to be the first in.

Some of the 14th are fresh to combat, others breathe hard with miasma-scarred lungs. Beneath their injuries is wounded pride. This city is their home, one now in enemy hands. It haunts them as they tell me about the loved ones they lost during the invasion.

But now, they look to enter Lion's Arch and avenge everything taken from them by Scarlet. 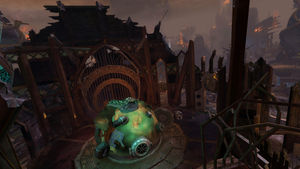 You smell Lion's Arch before you see what's happened to it. There's a sickly-sweet odor of rotting corpses mixed with a stinging snap of gunpowder. It's a change from the choking, lethal veil of Scarlet's miasma, now drifted out to sea.

By noon, the first shots rang out. The 14th Lionguard Security Force engaged Aetherblade squads for control over Trader's Forum. Lieutenant Honeclaw led the charge, pushing Aetherblades back with bursts from her flamethrower.

The fighting lasted most of the day. The 14th holds the forum, but Honeclaw has been quick to stop her troops from calling this a victory. Now the 14th is waiting...waiting for reinforcements, for the enemy's next move. They know Scarlet will not give up an inch of Lion's Arch without a fight.

In the distance there is the sound of combat and an acrid blue-steel cloud of smoke. 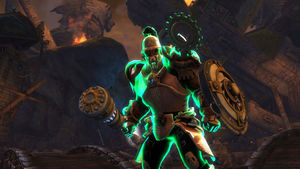 The attack came before the 14th could set up a defensive perimeter. Under cover of dusk, Aetherblade reinforcements flanked the 14th on several sides and assaulted them with alternating sniper fire and frontal attacks.

Lieutenant Honeclaw and her soldiers scrambled to establish a circle defense. They deployed turrets as a front line followed by a living ring of shields and swords to protect the 14th's sharpshooters.

Aetherblade flanking tactics blocked any chance for escape. Some of the 14th panicked and ran during the chaos, only to be skewered by enemy blades.

The 14th is rapidly losing soldiers and morale.

The enemy is numerous. Night is falling.

A Beast Covered in Cogs[edit] 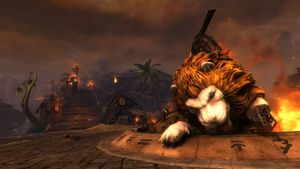 We saw him at dawn, just as Honeclaw ordered what was left of the 14th into position around the Trading Forum's wreckage.

He was a beast of a human, dressed in blue and covered in brass cogs. He commanded his Aetherblades to stand down and demanded our surrender. Honeclaw cussed back something not suitable for historical record. In return, the enemy readied their rifles to shoot all of us down.

Without a word, Honeclaw leapt from cover with her flamethrower pack turned around to her chest. She fired madly into the Aetherblades while charging their ranks. The last I saw of Honeclaw, she fired her pistol into her fuel canister, sparking an inferno that engulfed her and the enemy.

The explosion emboldened what was left of the 14th to renewed fury. In moments, the enemy was broken and bleeding. After securing the forum, the 14th found Honeclaw's remains and wrapped them in a Lionguard cloak.

Last Stand at the Trader's Forum[edit] 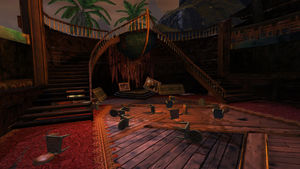 Morning. Despite massive losses, the 14th still holds Trader's Forum. With Honeclaw's death, the mood is subdued, but determined. In these tense, quiet moments, the 14th builds ad-hoc barriers out of Aetherblade bodies to give their few remaining sharpshooters cover.

This gruesome sight greets a stream of fresh reinforcements entering Lion's Arch. Because of the 14th, countless Lionguard and volunteers can now move into the city and take this battle to Scarlet.

The 14th will not acknowledge their triumph. They stay focused, watching the perimeter. Even though it's not said, they now wait for the words every Lionguard aches to hear: Scarlet is dead.