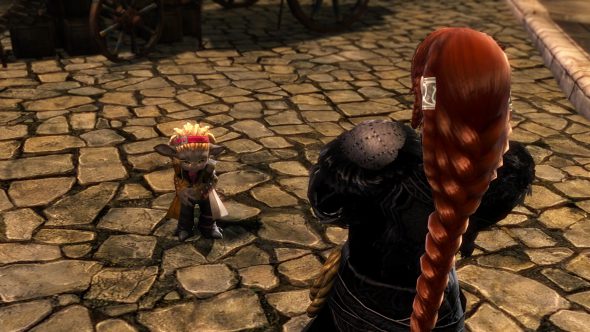 At this year's MomoCon, members of the Narrative Team hosted a panel on the fundamentals of narrative design for Guild Wars 2. With help from the audience, they created the basic concept for Vikki and her moa, Momo, who have left Rata Sum to explore more of Tyria. You can read all about them in previous chapters of their story.

By reflex, I looked over my shoulder, and the drop into Divinity's Reach spun below me. The graveyard's highest spires were at least twenty feet down, and the hard stone courtyard was almost fifty. I imagined what would happen if the norn woman released my wrist too suddenly, leaving me off balance. Or if she gave me a shove—

"Actually," I added, and it came out as a squeak. "Could you let me down off the ledge first?"

"I don't think you need to worry about that." Yet, her smooth voice implied. "All I need are answers to my questions. Until I get them, we're going to sit here."

Her grip wasn't tight enough to hurt, but it was like having my wrist trapped in a sphygmomanometer cuff. I didn't struggle. The priest was still nearby, but if I screamed or made a scene he might not get to me before the norn did something awful. Even if I managed to get away from her, she'd outpace me in seconds. My best bet was to sit still and wait for an opportunity.

Tonni must have sent her. Maybe she was having buyer's remorse. Or maybe, I thought uncharitably, she just regrets paying me. I knew she was successful, but not that she had enforcers to do her dirty work.

"You didn't have to grab me," I said. "You could have just asked. Tonni made me an offer, and I took it. What does she want?"

The norn arched her brows. "You didn't part on good terms, I take it?"

"No!" My face grew hot. I'd never done anything to Tonni, but she always went out of her way to make me miserable. "Tell her she can do whatever she wants with the device. I don't care about it anymore. But she's the one who said it was broken. She knew what she was paying for."

She loosened her grip on me a little, narrowing her eyes. "The device is broken?"

"I...I don't know. When I tested it for her, it gave me an unexpected reading."

Her fingers tightened again. "You tested it?"

"I demonstrated it!" A bird took off from the nearest stone roof, beating its wings. I swallowed hard, looking to see if the priest had heard me, but he'd wandered to the other side of the god statue. "That's the whole reason I was there. It was silly of me to sell it to her, but I didn't think anyone would want it, especially if it didn't work. I don't know what she told you, and I guess it's my word against hers, but I'm sorry if she lied to you to get you to come here. She does that a lot."

It was the first time I'd ever said outright that Tonni lied. Concepts like lying got fuzzy in academics, where I'd learned fast that what really mattered was people's willingness to believe in layers of proof. Could I prove Tonni had done something wrong and then blamed it on me? That she'd meant to do it, with malicious intent? Would people who had no reason to think badly of her believe me over her? She was always so good at talking her way out of situations. I couldn't even claim to be good at talking.

To my surprise, the norn slowly let go of my wrist. She leaned back, her posture changing from aggressive to relaxed, like the two of us really were having a casual conversation. "It sounds like a friendship gone sour," she said, and even her voice was gentler. Understanding.

I didn't like it. "Not exactly. I'd rather not talk about it, if it's all the same to you. Things have a way of getting back to her, especially from people who work for her." I scooted off the ledge and onto the street, half expecting her to reach for me again.

"Who said I was working for Tonni? I'm looking for her."

My burst of adrenaline was fading, leaving me angry and snappish. "Then what did you scare me for? What's going on?"

"The device you sold to her. It should have been about the size of your fist, is that right?"

"I did." I blinked. I was starting to think I'd stumbled onto something way over my head. "I mean, nobody gave it to me. I invented it. It was just a crummy thing I built to try to get funding from a krewe, that's all."

"It's supposed to analyze livestock and predict their lifespans." 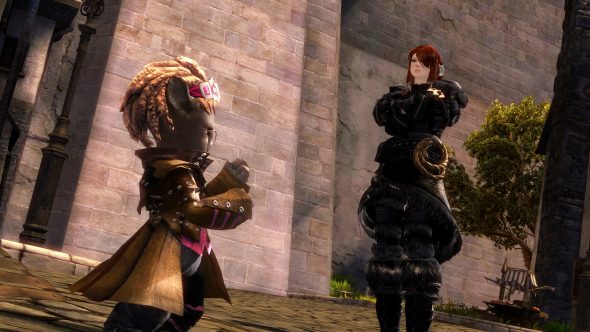 She stood, folding her arms, and rubbed the bridge of her nose. "Raven's quills," she muttered. I almost felt sorry for her, then remembered how she'd first looked at me—like a wrinkle in need of ironing.

"I was more worried about Momo than anything," I said. "So I don't know what happened to Tonni after she took the device. I'm sorry."

The norn knelt in front of me. It caught me off guard; bigger people almost never do that. "Either you're a very good actor," she said, looking me in the eyes, "or I owe you an apology."

I rubbed my wrist. "I'll settle for an explanation."

"Call me Alfhildr." She smiled at me, but it seemed forced. "And before I explain anything, I'd like to see Momo."

Alarm shot through me. "Why?"

"Because I might be able to tell you why your device malfunctioned. And because right now, you and your pet are my only leads."