Elder Dragons: Notes from the Field 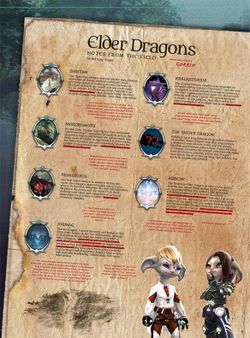 Elder Dragons: Notes from the Field is a document by Taimi with additional notes by Gorrik. It is included verbatim in GW2 Living World - Issue 01 and transcribed here.

The first Elder Dragon defeated by the Pact, Zhaitan embodied all things shadow and death. Used overlarge, sentient walking mouths (Mouths of Zhaitan) to travel the world and consume magic for its master. Firsthand accounts describe it as "unspeakably terrifying."[1] Also, despite being the Elder Dragon of death, was killable—and, then, was killed.

Second Elder Dragon slain by the Pact. Embodied "plant and mind", spreading its tendrils across the Maguuma region and driving the sylvari mad. Was likely more draconic in appearance in prior cycles, but took root eons ago and essentially became the center of the Maguuma Jungle—colloquially known as the Heart of Thorns.[2]

The first Elder Dragon to awaken during this cycle (they happen approximately every 10,000 years), Primordus embodies fire and conflagration. Displaced the asura and the skritt from their underground cities and unleashed an army of malevolent rock creature[sic] called "destroyers."[3] Currently sleeping.

The Ice Dragon. Forced the norn and kodan to flee from their homes in the Far Shiverpeaks. Jormag is thought to be perhaps the most "eloquent" of Elder Dragons, persuading you to ally yourself with them in exchange for power.[4] Jormag's desires become yours, and you are eventually transformed into icebrood.[5] My own experimentation confirms that Jormag's and Primordus' magics have a unique and mutually debilitating relationship. Currently hibernating.

The Crystal Dragon. Anything he breathed on turned to living crystal—"Branded"—and became connected to Kralkatorrik via magical resonance. The Pact Commander flew down his throat with Aurene and—here I quote—"punched his heart to death." In the process, they discovered that overconsumption of multiple spectrum magics had broken his mind apart.[6]

Scholars have long debated the possible existence of another Elder Dragon—one that may possess a degree of control over water and the oceans. Canthan and Elonian sailors have recounted tales of strange creatures heretofore unknown emerging from the oceans, possibly tied to this dragon's resurgence, but as of this writing, that folklore has yet to be empirically verified.

The first new Elder Dragon in over 10,000 years, Aurene was raised from an egg by the peoples of Tyria (including this author). She ascended following Kralkatorrik's demise, becoming a new kind of Crystal Dragon[7]—one that can act as a kind of prism, separating and recombining all the magics in the spectrum. Her unique history makes her the first Elder Dragon to know, and care about, mortals—and vice versa. Our work to understand what she is, what she can be, and what we are to her is just beginning.[8]