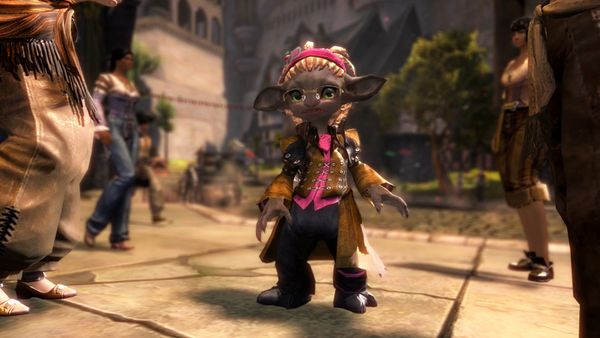 At this year's MomoCon, members of the narrative team hosted a panel on the fundamentals of narrative design for Guild Wars 2. With help from the audience, they created the basic concept for Vikki and her moa, Momo, who you can read more about in chapters one, two, three, and four of their story.

In September, we sent out a casting call to the community on the official Guild Wars 2 Tumblr asking players to submit profiles of their own characters. In this and future chapters, we'll be selecting real player characters as needed to play minor roles in the story. We'd like to thank everyone for the incredible response we received!

Nothing was missing from my bag when I woke up, aside from one apple. I discovered the culprit for that when I caught Momo pretending to be asleep on the half-eaten core, but I was sure she'd been asleep when someone reached into my pack. Maybe I'd been asleep? It could have been a lingering nightmare.

The world still felt a little out of focus when I left Momo at Mepi's ranch for the day. "I'll give her a good looking over," Mepi said. "Why don't you stretch your legs in the meantime?"

Saying, No, thank you, I'd rather sit here and worry wouldn't be polite or productive, so I lifted my ears and tried to look chipper. "Sure! What do you recommend?"

"There's Eda's orchard not far from here, and some folks like to look at the dam. Then there's the city, of course, if you don't mind a walk."

I didn't mind the walk. People who aren't asura wander through Rata Sum wide-eyed, marveling at the cubes floating in the clouds. The holograms and golems might as well be pure magic to some of them. I thought maybe I'd find Divinity's Reach as quaint and rustic as Shaemoor.

As soon as I stepped through the gates, I realized that the human city had been built to house hundreds of thousands of people, most of whom are at least three feet taller than me. I could have fit an entire flock of moas shoulder-to-shoulder in each of the avenues, and just thinking of the scaffoldings they must have needed to build so many massive towers and arches without levitation technology made me break out in a cold sweat.

I wandered up the stone streets and into the first hallway I saw, and gasped. The walls were made of clear glass lit from within, and fish swam back and forth behind them. If Momo had been with me, she would have gone absolutely wild. It was cool and peaceful, and I'd have stayed there much longer if I hadn't been in the way of pedestrian traffic. 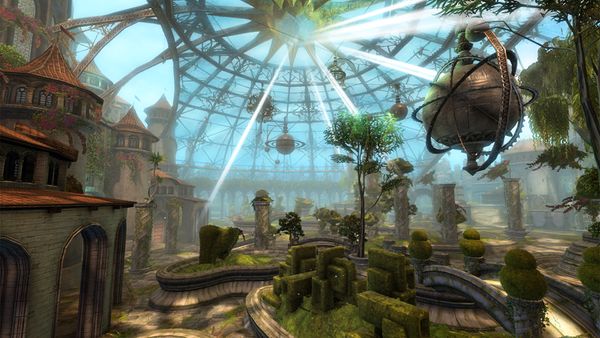 Beyond the aquarium hall was a sprawling garden. Shaped hedges lined the footpaths, and pillars draped in flowering vines reached toward a domed glass ceiling. Suspended from that was a huge orrery of burnished metal. Its moon was a crescent with a smiling face, and the whole contraption creaked pleasantly as it rotated. Asuran technology can be stunning, but humans seemed to value beauty over function.

Unfortunately, it didn't strike me as the sort of garden you could curl up and go to sleep in. I was still half-rested, and I really wanted a cup of strong coffee.

A sylvari in blue and white armor was standing nearby, so I made myself ask for directions. He was huge, but he had a kindly face. Better yet, there was a little animal poking its whiskery nose over his shoulder. When I giggled, it darted into the sylvari's bag.

He introduced himself as Issandür. "The easiest way to remember where you are," he said, "is to know the names of the six human gods. The city is divided between them."

He smiled. "Balthazar, and yes. If you're looking for coffee, you might try the Ossan Quarter. Take Grenth High Road and then the left-hand path down."

Grenth High Road ran right up to the city's stone walls. Even the tengu gate was smaller. It made me dizzy; if something that big fell inward, it would wipe out everything below. At the end was another god statue, a human priest, and a norn woman leaning against the wall—but I didn't want to get any closer.

I shivered. It'd be much nicer to look out over the city, but there was a tall ledge on either side of the road. I jumped to grab the edge of it, dug my toes between the bricks, and pulled myself up.

The city sprawled out like a massive canyon, with slope-roofed houses poking up like rocks below and the streets winding through them like streams and rivers. Hundreds of white birds swooped through the air from one end to the other. Would they ever even need to leave a city this big to get food or make a nest? Maybe they thought this was the whole world.

I sat down, hugging my knees. The ledge was broad enough that I didn't worry about falling off. Just beneath me, humans wandered through a courtyard full of elaborate stone buildings and...oh. Headstones. Did they bury their dead here in the city?

The norn woman who'd been leaning against the wall wandered over and braced her foot against the ledge. To her, it was the size of a stepping stool. "What's in the cemetery?"

It took me a moment to realize she was talking to me. "Oh, nothing in particular." It struck me that it might be rude of me to watch people visit the graves. "I just stopped to sit for a minute."

I was sitting in her shadow, which made me shiver again. I looked up. She had a round, freckled face, sharp blue eyes, and copper hair woven in a braid as long as three of me. Her pale skin was a little wind-reddened, and she was bundled up in black furs and leather. 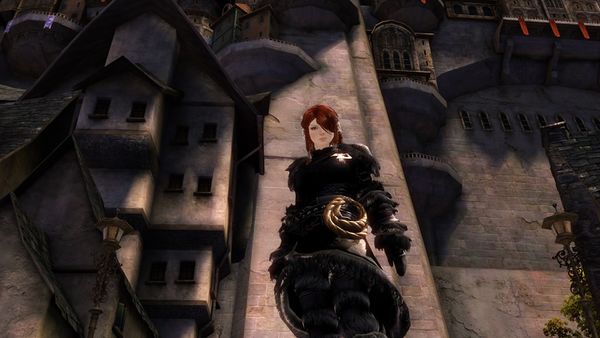 She looked at me like a cat looks at a bug. Suddenly the ledge didn't seem wide enough anymore. I'd heard there were human bandits even in the city, but...

"Um, sorry." My palms felt disgusting and sweaty; I tried not to be too obvious about wiping them on my pants. "I'm just—I'm new here, and everything's big, and I'm kind of nervous. Can I help you?"

She sat down next to me and smiled. "I think you can."

I smiled back, relaxing. Oh, she wanted to chat. I wondered if it was as hard being tall in Divinity's Reach as it was being my size; I opened my mouth to ask her about it, hoping it would break the ice, when she reached out and grabbed my wrist.

"Hey." My voice failed, the way it does when I try to scream for help in a bad dream. Her hand was as big as my entire forearm, and she was so strong that I couldn't even move it.

The norn leaned in. "Why don't we introduce ourselves?" she said softly, still smiling. "You can start by telling me how you know Tonni. Then, I'll tell you what I need you to do."