An Interview with Queen Jennah

This article is copied verbatim from an official source. Accordingly, please do not correct any typos or other errors before verifying that they do not exist in the original article.
Spoiler alert: The following text contains spoilers relating to Living World Season 3.

An Interview with Queen Jennah is a tale written by Aaron Linde. 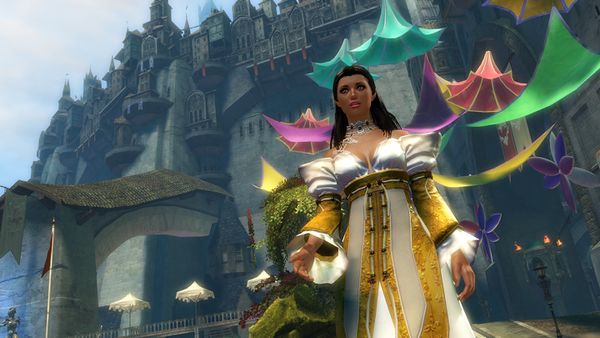 The White Mantle's activities of late are putting the populace on edge. What does the Crown plan to do about them?

First, let me be clear: denizens of Divinity's Reach have nothing to fear. We are taking steps to bolster security in and around Divinity's Reach to ensure the safety of our citizens. The Shining Blade is keeping a close eye on the Mantle's movements and activities, most of which are localized to mere raids in northern Maguuma. These aren't the calculated motions of an organized group—these are the isolated activities of a handful of conflicted and deeply disturbed people. Nothing more.

What sort of security steps are you taking?

The Seraph are stepping up their patrols in Shaemoor. What's more, we've tapped the best engineering teams in the Reach to bolster the city walls and shore up any weaknesses in our defenses. In the event of a crisis, my advisors have developed plans to evacuate the townships surrounding Divinity's Reach and house civilians within the safety of the city walls. But I must stress that these preparations are focused toward true crises—natural disasters, dragon sightings, and the like.

Seraph Captain Logan Thackeray has not been seen in some time. Can you speak to his status?

Captain Thackeray suffered heavy injuries in the fight against the jungle dragon Mordremoth and is currently recuperating. One of my aides checks in on him regularly and says that he's coming along well. Knowing the captain, I imagine he'll resume his duties as soon as he's physically able and cleared to do so, and not a moment longer—there's not a force in Tyria that can stand between Logan and his charge.

Have you gone to see the captain yourself?

I have not. Sadly, ruling a kingdom has a way of occupying one's time, particularly with the troubles we've seen of late. But my aides are keeping me well apprised of his progress, and I have the highest hopes for his quick recovery. He is ever in my thoughts and prayers. May Dwayna watch over him.

What news of the Pact? What measures are the Crown taking to support it?

Regrettably, the Pact's campaign in the Maguuma Jungle cost many lives, and allied forces are still regrouping following the assault on the jungle dragon. General Almorra Soulkeeper is working tirelessly to support these efforts, and in turn, we will give whatever support we can to the general. I'm confident that the Pact will persevere under her leadership and guidance.

Beyond the Pact's casualties, many Krytans perished in the assault on Mordremoth. Do you have any words to share with your people regarding the fallen?

This conflict was by all accounts one of the truest tests of resilience and resolve that Kryta has ever faced, and though we claimed victory in the end, that victory came at a heavy price. I've heard the cries of anguish of our people in the wake of these losses; we extend our deepest condolences and our unending gratitude to the families of the fallen, for all that they've sacrificed in the name of our brave nation. It is now incumbent upon all of us to never forget the courage and valor of those we've lost and to ensure that their great sacrifice was not in vain.

And what of the Seraph's casualties? How depleted are their ranks?

A small detachment of elite Seraph forces was dispatched to join the Pact fleet on their ill-fated incursion into the Maguuma Jungle, where they were set upon by Mordrem. While we have yet to receive a full report on the casualties, several Seraph have been recovered from the jungle—and we hope to find more as our search parties continue to scour the region for survivors. I ask that all citizens of Divinity's Reach keep our brave soldiers in their thoughts and prayers to Melandru.