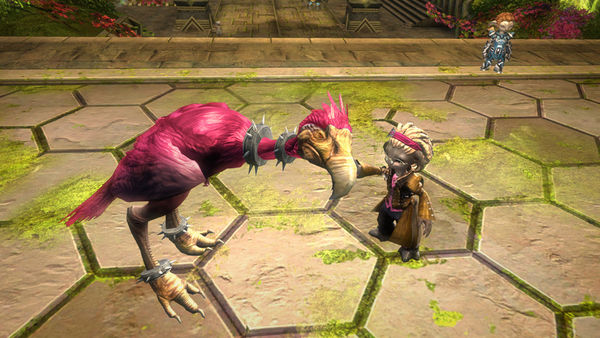 At this year's MomoCon, Narrative Director Leah Hoyer and Narrative Designer Ross Beeley hosted a panel on the fundamentals of narrative design for Guild Wars 2. With help from the audience, they created the basic concept for a new character. This character and her moa will be traveling through some familiar territory—read along in this series of stories to see the world through her eyes!

We were late to the junk auction—properly known as the Low-Level Amateur Market Annual Sale—because Momo wanted to chase bugs. From the moment we set foot into Soren Draa, you would've thought the ground had come alive. She stuck her big beak in the grass and all but tore her lead out of my hands.

That was how I arrived at the last place I wanted to be: fifteen minutes behind schedule, elbowing through throngs of attendees, wrestling and pleading with a bird three times my size. I like to tell myself I trained Momo well, but moas are naturally skittish. By the time I coaxed her to her pen and started to unpack, she was making low, suspicious noises at the passing crowd.

"You can chase all the bugs you want when we're done. You can chase them for a whole hour." I rushed to set up my invention, making a hasty check of the harness and case, and then slid it over Momo's head so the biothermal analyzer rested snugly over her breastbone. I ran a test; the fifteen-year estimate came up promptly, and the display was clear and readable. "Trust me, I want this rigmarole over with as much as you do."

"Squok." Momo ruffled her bright pink feathers, tilted her head to the side, and eyeballed a patch of grass, as though daring it to produce something living. Laughing at her made me feel a little better.

For the first time, I was glad my P.E.T. wasn't flashy or complicated. Some of the other inventions up for sale were massive, with blinking lights and terminals. I'd nabbed a small station far from the main walk for cheap—it gave me less chance of being approached by a buyer, but I didn't really expect to find anyone interested in my invention, anyway.

A voice cut through the drone of the crowd. "Well, well, if it isn't the grass-fed disaster. I thought you'd given up, Vikki."

"Tonni." I took a deep breath before turning around. "Are you exhibiting today?"

Tonni pushed her way to the front of my booth and gave me one of the cold, appraising looks I'd spent my school days dreading. Her hair was coiled in precise loops around her long ears, her sleek black-and-red coat decked out with the latest personal magitech enhancements. It was probably too much to hope for that she'd hit a rough spot after college, seen the error of her ways, and come looking to make amends.

"Buying, not showing." She wrinkled her nose. "Maybe. I'm looking for gems in the rough. Brilliant ideas before their time, ambitious solo projects bogged down by unreasonable ethical constraints—that sort of thing."

I swallowed. "I haven't got any of those."

"Shocking." She eyed Momo up and down. "Is that thing on the bird your invention? What is it?"

I wanted to tell her to go chase a few bugs herself, but what if she was the only person who bothered to show any interest in buying? What if she was really curious about it? I stood up straight and adjusted the analyzer harness. Momo huffed. "This is the Predictive Existence Tool," I said. "It...well, it predicts the remaining existence of domesticated livestock."

"The name's a little forced. It tells you the animal's life span?"

My ears burned, but I went on with my spiel. "It can help identify any unknown medical conditions by doing a full-body examination of the—Momo, shh!"

Momo squawked and lunged for the grass again, tracking something. I tugged her back gently, and I thought I heard Tonni snicker.

"Why don't you give me a demonstration?" she said. "If your bird will let you."

"Of course she will. Momo, stop." I adjusted the halter, smoothed Momo's feathers, and kept my head down while I started the P.E.T. It beeped, trilled, and bathed Momo in a brief flash of violet light—totally unnecessary for the analysis, but my mentor, Floxxa, had suggested some theatrics. "As you can see, this moa—"

I stopped short and stared at the display. That wasn't right—it couldn't be right.

Tonni peered over my shoulder, reading the display. "One year?"

"That isn't right," I stammered. "It should be fifteen years, not one. She's only a year old now, and I just tested the device. It must be—"

"A malfunction?" She shook her head and tsk-tsked. "How unfortunate. For a faulty prototype, I'll give you a fifth of the asking price." 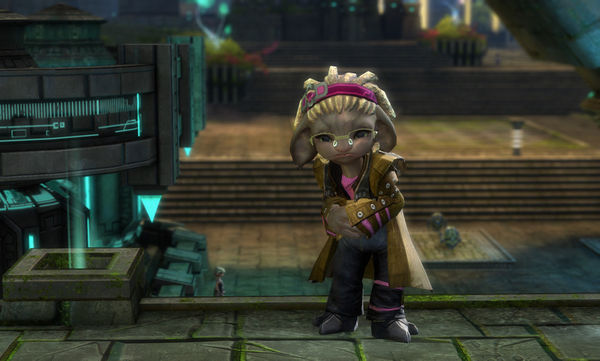 I sat underneath a tree and watched the other amateur inventors clear the last of their unsold projects away. A few of them left in tears. I felt awful for even thinking it, but at least mine wasn't the only malfunctioning invention.

"It was a malfunction," I said to Momo, who'd tired herself out running through the grass after I handed the P.E.T. over to Tonni. She rested her head on my knee, and I pressed her tall crest feathers down to make them spring up again. "Anyhow, there's always next year."

Next year. My stomach sank like a lump of hard bread. What if it wasn't a malfunction at all? What if I doomed Momo to spending her last year on Tyria playing with her toys in the corner of Floxxa's lab while I beat my head against another invention, just because it was easier to believe that my very first completed project was broken? If this was one of the educational enhancement stories I'd read growing up, things would definitely turn out like that.

Of course, the protagonists of those stories always had reasons to believe in their inventions.

"There are moa ranchers in Kryta," I said, thinking aloud. I scratched between Momo's eyes. "They could give us a second opinion."

I'd only ever seen paintings of Kryta, but the thought of traveling across a sea of grass under the open blue sky shook some of the gloom clouds from my cranium. I imagined Momo zooming through the fields, stretching her legs and basking in the sun. I'd always been too busy or tired to take her anywhere interesting.

My only hope for gaining any kind of scientific credibility in Rata Sum was gone, and for barely enough money to pay my lab fees. I didn't even have enough coin to take a gate to Divinity's Reach. And if Momo was really hurt, or sick...

But she seemed to be in perfect health, and when I looked down at her she warbled softly at me as if to say, Adventure? Let's go!

"How about it, Momo?" I hoped I sounded more confident than I felt. "Do you want to go for a walk?"