Delegation is a tale by Scott McGough.

Frostbite always walked a little sassier in the Black Citadel. Rox wasn't sure if her albino devourer felt invigorated by the wave of strength and confidence High Legion soldiers projected, or if he was intimidated and faking it in order to blend in.

Either way, she was glad at least one of them appeared bold. Tribune Brimstone had personally summoned her to his office, again, and it had sent her into an extended bout of quiet panic, again. In a city full of fearsome authority figures, Rytlock Brimstone was in a class by himself: notoriously short-tempered, hard to please...and everything Rox wanted depended on her ability to impress him.

She had taken all the precautions she could: when she woke up, she made a circle with thumb and forefinger and spat through it three times. She put on her newest pair of boots and walked backwards out of the barracks to confound any bad luck that might be following her. She wore her two luckiest keepsakes (the first chunk of iron ore she ever mined and the simple steel soldier's band Primus Drillbit had given her upon graduating the fahrar) on a chain around her neck. She hoped these efforts would be enough to satisfy fortune's fickle favor and allow her to stand or fall on her own merits. 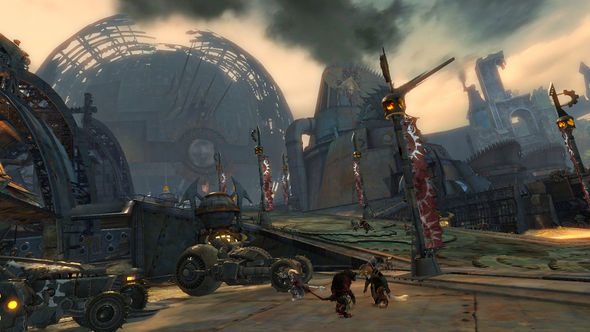 "Come on, boy," she said to Frostbite. "The tribune's waiting."

The devourer chittered enthusiastically and fell in beside Rox as they entered the Core and climbed the circular gangplank to the great metal sphere's third floor. Laria, Rytlock's aide-de-camp, was just leaving Rytlock's office.

Laria nodded. "But he's not happy. Watch yourself." She glanced down at Frostbite. "And watch him, too. I'm not cleaning up any more devourer mess."

Laria scurried off, and Frostbite growled slightly as she went, his twin stingers quivering.

"Rox!" Rytlock's voice came echoing out of his office. "Get in here."

Rox's hands flashed from the ore to the ring, touching each in turn to verify they were still in place. "Heel, Frostbite," she said. "And behave. I mean it."

Rytlock stood behind his desk. Laria has been right: the tribune's eyes were hungry, his teeth clenched, and his hackles up. As Rox approached, he drew a sheet of paper from the stack before him and angrily rolled it into a tube. 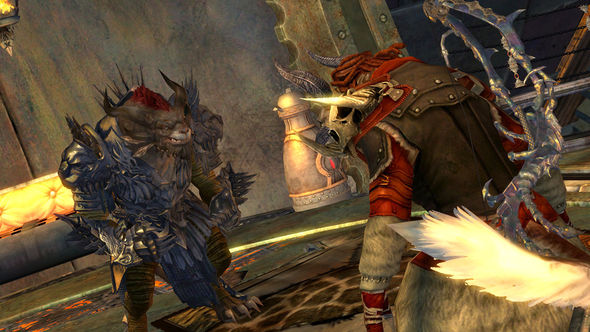 "At ease." Rytlock gestured at Frostbite with the now-crumpled tube. "And that thing better be housetrained by now."

"He is, sir. And again, my apologies. He thought Laria was challenging me, so he—"

"Don't care," Rytlock said. "What do you know about the human queen?"

"Not much. She supports the peace treaty, but she's having trouble getting the rest of of Kryta on board."

"She's having a party," Rytlock said. He extended the crumpled paper to Rox. "For the tenth anniversary of her coronation. They're billing it as a 'celebration of human resilience,' or some such slag."

"Glad you think so. I've been invited, but I've got real work to do. And I'd rather pull out my own teeth than attend another state function." Rytlock smiled sharply. "Congratulations. I'm naming you as my replacement. You are now the Citadel's official envoy to this important event."

Rytlock laughed. "It's not a promotion, it's an errand. But an important one. Whatever the queen is trying to accomplish, we need a presence there to protect our interests. Smile politely, don't antagonize the other dignitaries, and steer the conversation away from the treaty whenever you can. The last thing we need is for this nonsense to impact the peace talks."

Rox decided to be bold. "Will do, tribune. But if I may ask—"

"This has nothing to do with you getting into the warband." Rox's face fell and Rytlock snarled. "Burn me, your mind only has one track, doesn't it?" 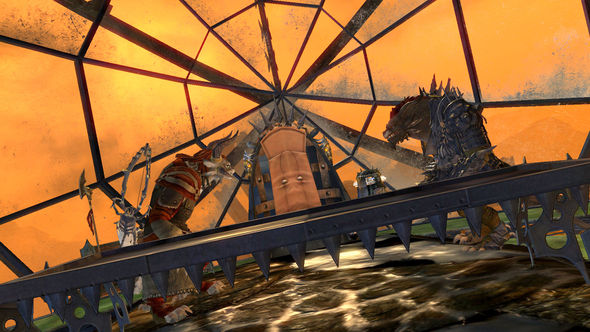 "I bet you spent all morning spitting through your fingers and loading up your kit with good luck charms, didn't you?"

"Some things never change." Rytlock's stern tone became more businesslike. "There's another reason I want you to go in my place," he said. "Logan Thackeray will be there. And any time you put Logan and the queen in the same place, things get...irritating. I don't have the patience for that right now."

Or ever, Rox thought, but all she said was, "Yes, tribune."

"Here's the invitation. See Laria for the travel details. She'll explain things to Jennah's people and make sure you're expected."

Rox hesitated. "Can I bring Frostbite?"

"As long as you keep your head down and don't start any wars or set any palaces on fire, you can bring anybody you like. Bring a devourer queen, for all I care."

A thought occurred to Rox. "So norn are allowed?"

Rytlock snarled suspiciously. "Who did you have in mind? That goofball cub you've been running with?"

"His name is Braham, tribune."

Rytlock snorted. "I said, 'bring anybody you like,' soldier. Are you unclear on that concept?"

"Good. You have your orders. Handle this like it needs to be handled, and maybe then we'll discuss your potential future with the Stone warband."

Rox failed to hide a smile, but she did manage not to reflexively touch any of her lucky totems. "Thank you, tribune." Frostbite purred in support. 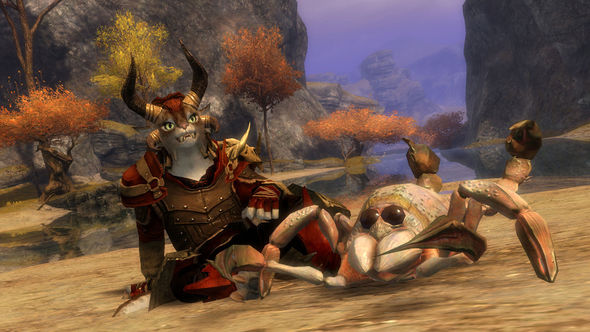 "Keep your ears up. This may seem trivial, but if the Black Citadel comes out looking worse than it did going in, you'll be stirring the Imperial Smelter with a teaspoon."

"And stop smiling when I'm threatening you. Smile when the job's done. Dismissed."

"Sir." Rox saluted, and then turned, eager to get out before Rytlock changed his mind.

Frostbite was still fixed on the tribune, however, and she saw the devourer's legs tense, as if preparing to leap playfully onto Rytlock's desk. She nudged her pet with a booted toe and said, "Come on, boy."

Together, Rox and Frostbite double-timed it out of the office. She had a lot to do: speak to Laria, prepare for the trip to Divinity's Reach, and send a bird to Braham so he'd be ready to go.

She glanced down at Frostbite. "Want to go to a party, boy? We get to be dignitaries. And we take one step closer to the Stone warband."

Rox touch-checked her good luck charms once more, and then smiled. Her totems had definitely helped the meeting with Rytlock go smoothly. Compared to that, the queen's party would be a stroll in the park. All she had to do was collect Braham, make it to the Krytan capital on time, and not embarrass the Black Citadel.

What could possibly go wrong?