Defend Tyria from the Elder Dragons' rampage. Contains story from Episode 5 of the Icebrood Saga, "Champions".

The Dragon Response Mission begins in Soren Draa, with the initial event involving activating Powered-Down Golems with Toolboxes, rescuing citizens and killing destroyers. The first two options are easiest, and as such should be completed first. If playing on a private instance, however, it is recommended that rescuing citizens be prioritised as it takes less time than activating the Powered-Down Golems. Using mounts significantly decreases the time taken to get the citizens to the designated zone. Multiple citizens can be rescued at the same time: they do not take damage from enemies and have no pathing constraints.

After completing the initial event, several different allies can appear to assist in defeating the Destroyer of the Ironhammer Line, the boss of the Dragon Response Mission and Taimi will then need to be escorted to the center of Wildflame Caverns, where the vista would be in the open world map. These allies include the Order of the Crystal Bloom, Peacemakers and Wardens. Depending on which option arrives to help, you can receive boons from the Prismatic Crystal, fight inside an asuran power suit, or summon a Sylvan Hound to your aid.

Partway through the caverns, it is possible to access Champions Insight: Metrica Province atop a rocky shelf above some lava. Upon reaching the area below the vista, the Destroyer of the Ironhammer Line appears. Its abilities include knocking down nearby NPCs and players with falling rocks and summoning Destroyer Bursters, Fiends, Melters and Soldiers. Its attacks can be best avoided by going onto the rocks where the vista would normally be. Destroyer Bursters will leap up with you, however, so killing them before they get too out of hand is useful.

Upon it reaching 70% health, it will disappear and will need to be followed outside of the caverns into Soren Draa. It is possible from here to stand up above it on two hammock-like structures and attack it from there while the NPCs draw its aggro, but Destroyer Bursters will leap up onto the hammocks, making it a good idea to switch hammock every so often.

When the Destroyer of the Ironhammer Line gets down to 35% of its health, it will disappear again and teleport to the nearby arena in The Hinterlabs where golem battles take place in the open world and continue fighting. You will have the assistance of M.E.T.A. Golem this time; however, it is frequently distracted by destroyers but will keep the destroyers locked in place.

After defeating the Destroyer of the Ironhammer Line, a chest changing in loot quality based on the time you took to defeat it will appear. You can then exit the instance. 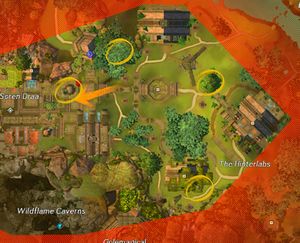 Entering Incinergen Labs
<Character name>: Destroyers incoming! Time to evacuate. Everybody, get to the portal!
Krewe Researcher (3): This is all meaningless. There's no fighting Primordus.
Krewe Researcher (4): Not with that attitude! Alchemy! Why did I get paired with you?
<Character name>: For now the smartest thing is to get back inside the city.

After defending the Hinterlabs
Taimi: Great—you're both here. We have the perfect-size force to head into the caverns.
<Character name>: You said to get people out. We have time for a research expedition?
Taimi: Half these folks will guard the portal and help the evacuation. But we've got a rare chance to get some even rarer data.

Speaking with Taimi
Taimi: Are you ready to head out, Commander? There's no time to lose!

Our defenses are prepared. Let's go!

During an arrival of the allied faction
One of the following:

(If supported by the Asura)

Golemancer: My krewe's ready to pitch in.

(If supported by the Sylvari)

(If supported by the Crystal Bloom)

(If supported by the Deldrimor Dwarves:)

Taimi: Nothing like dwarven alchemists to mix up something nasty to exterminate a few destroyers. With extreme prejudice.

(If supported by the Tengu)

Taimi: Tengu archers have deadly aim. Perfect for pinning down destroyers in a pinch.
Master Marksman: Our bows are at your disposal.

(If supported by the Olmakhan)

Taimi: Since we're looking to snuff out some destroyer fire, the Olmakhan will summon sand effigies as backup.
Olmakhan Sandshifter: We're here to help.

(If supported by the Skritt)

Taimi: The skritt—well. Skritt do what skritt do. I'm hoping they stay grouped long enough to be a nuisance to the destroyers.
Skritt Leader: Skritt here to help.

Braham Eirsson: So what's down there that's so important?
Taimi: The signal from deeper in the caves. It's one I haven't been able to duplicate consistently in the lab.
Taimi: Ryland and Jormag are waiting on my analysis—my findings could help them kill the fire dragon.
Braham Eirsson: Wait. You're okay with this..."alliance"?
Taimi: If it means stopping Primordus. You're not?
Braham Eirsson: I just... An Elder Dragon is an Elder Dragon. Jormag can't be taken lightly.
Taimi: Jormag's not the one pinging my instruments. C'mon.

Taimi: Primordus is all hunger and destruction. At least Jormag can be spoken with—reasoned with.
Braham Eirsson: Ever tried to chat up icebrood? Doesn't work. They just start smashing stuff.
Taimi: What about the Svanir? Frost Legion? Yeah, scary fanatics, but mostly intelligent. And now Ryland controls them.
Braham Eirsson: Ryland. That's exactly how Jormag gets to you. Talking. Seeming reasonable.
Braham Eirsson: Prophecy says I kill the ice dragon or they kill me. Doesn't sound very reasonable.

<Character name>: Is this far enough? We're only going to get more of these the farther in we go.
Taimi: That's the point, Commander. And we're definitely getting warmer.
Taimi: There is precedent for a rational Elder Dragon: Aurene. And enemies can become friends—look at Rytlock and Logan.
<Character name>: Pretty small sample size.
Taimi: Right now, Jormag and Primordus are evenly matched.
<Character name>: So we get them to destroy one another.
Taimi: Pretty sure Jormag won't play along. We may have no choice but to help them kill Primordus.
Taimi: Before, we had guesses; now we have knowledge. Jormag's been very forthcoming. Did you know the two dragons are twinned?
Braham Eirsson: JORMAG. LIES. That's their whole thing.
Braham Eirsson: This is getting rough. How many more pings do you really need?
Taimi: Aaaaand that's why I brought reinforcements.

Taimi: This is the spot. Strongest readings yet.
Taimi: Look, Braham, I get where you're coming from. I do. But even if Jormag's lying, the data doesn't.
Taimi: Jormag's not the one burning our world, killing our people, destroying our homes. Primordus is.
Braham Eirsson: Jormag terrorized the norn. Made us run—remember? Run or die.
Taimi: But you're still there, in the mountains and snow. We had to abandon everything. And we're not the only ones.

After escorting Taimi
Braham Eirsson: Jormag—
Taimi: Isn't. Threatening. You!
Taimi: But that is!

Getting the destroyer champion to 70% health
<Character name>: Got what you came for, Taimi. Let's get you back through the portal.
Taimi: This destroyer's spiking crazy energy! I need to stick with it longer. Keep it busy—for the data!

Getting the destroyer champion to 35% health
Taimi: Almost had it!
<Character name>: So did we.
Braham Eirsson: The arena. It's headed over there.
Taimi: How do you—that doesn't even make any sense: the portal's over here.
Taimi: Destroyers definitely do not have reason... New algorithm's almost locked on. Hold just a sec—
Braham Eirsson: No time—it's calling! Commander, come on!

If taking a while to reach the Battleground Plaza
Taimi: Every destroyer in the area is converging! Peacemakers, asura! Fight!

After defeating the destroyer champion
Taimi: Incredible. The destroyers are all linked—their energy signatures read as Primordus whenever they attacked.
Taimi: I wonder if their connection to him strengthens when they burn...?
Braham Eirsson: Stop pretending you're not afraid!
Taimi: Of course I'm afraid! So are you! The difference is, what I'm afraid of is actively trying to burn down my gates!
Taimi: I'm not saying you're wrong. We can deal with Jormag later, if it comes to that. But Primordus is the threat right now.
<Character name>: Braham... You knew where a big destroyer was going to be. For the second time. How did you...?
Braham Eirsson: I don't know. I don't know what's going on with me.
<Character name>: Taimi was right—we're all scared. We face the threats as they come. It's all we can do.
<Character name>: And if Jormag becomes a threat again, we'll face that too. Believe me, you're not the only one with doubts.
Braham Eirsson: Let me know when Taimi tells you the next hot spot. I'll help wherever I'm needed.