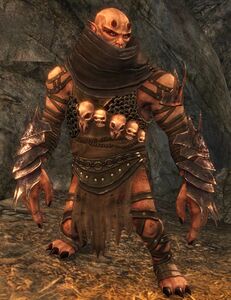 I won't forget what you did for us. When you make your stand against the dragons, call me. I will repay that debt.

Chieftain Lagula is an ogre of Agrak Kraal who becomes chieftain of her tribe after discovering the fate of her predecessor. She assists the Pact in the war against the Elder Dragons.

While Chieftain Uldek was in charge of Agrak Kraal, Lagula was considered viable for chieftainship, but had always refrained in fear of splitting the kraal apart. However, after Uldek was corrupted by the Branded in 1325 AE, Lagula took leadership to defend against his attack, evacuating Agrak Kraal when the massing Branded army approached.

She ultimately defeated the corrupted Uldek with the help of the Pact Commander but was unable to save Agrak Kraal from being destroyed. Wishing to avenge their kraal and previous chieftain, Lagula and her tribe vowed to join the Orders in fighting the Elder Dragons and began looking for a new place for their people to live in.

Lagula later assisted in the Pact's assault on Orr and helped the Commander's party bring down one of the Eyes of Zhaitan. When the Commander and Marshal Trahearne were about to be swarmed by Risen while trying to purify the Artesian Waters later on in the campaign, the ogre chieftain was among the reinforcements who arrived to support the pair and ultimately witnessed the successful culmination of Trahearne's Wyld Hunt. Lagula was among the allies in Fort Trinity who celebrated the victory over the Elder Dragon Zhaitan after the Pact Commander and Destiny's Edge had returned from Arah.

After Zhaitan's death, Lagula and her tribe left the Pact due to the Pact being unable to help them get new pets and a new home. They headed westward aboard an airship in 1328 AE in hopes of finding a new home and new pets, having heard that the Heart of Maguuma was home to many pets. However, the airship crashed in Tangled Depths and they were left with many dead, including all of their pets from Ascalon.

Having discovered the chak, Lagula and her people investigated them and tried to tame the chak as well as local bats. Realizing that chak could not be tamed, the ogres rejoined the Pact's forces south into Dragon's Stand to confront the Elder Dragon Mordremoth. They used the knowledge they had gained in the jungle to gather an army of jungle pets to assist them in the assault while also riling the chak against Mordrem as a distraction.

The three-pronged assault was successful, and the Pact and their jungle allies fought their way into Dragon's Domain. Lagula joined other commanders in the clash against Mordremoth and saw the Elder Dragon fall after a fierce battle. She exchanged excited words with the Pact Commander about the battle, claiming that it had been a great hunt that would be long remembered.

Section-stub. This key section of the article is incomplete. You can help the Guild Wars 2 Wiki by expanding it.
Reason: Missing events

Attack the Mouth of Mordremoth's head while evading its attacks (80)

Attack the dragon's body while evading its attacks (80)

In Dragon's Stand, when Mouth of Mordremoth event begins
Lagula: We hunt together.

In Dragon's Domain, after killing the Mouth of Mordremoth
Lagula: Quite a hunt, Commander. One for the ages.
<Character Name>: Glad to have you in the fight with me.

Greets
An ogre's pet shows her true strength.
Do you have any pets?
Do you need something?
Welcome.
What brings you to me?