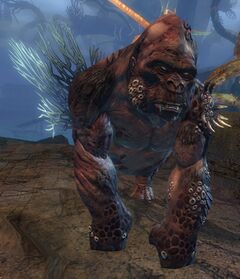 Part of
The Ruined City of Arah (explorable)

Korga the Mighty is a legendary Risen Gorilla who charges and knocks down foes. He will revive the dead ape bodies surrounding the fight area.

Also note, there may be an area to bring Korga in which he can only revive a few apes. (more information needed on this spot) However, letting Korga move around the arena results in more apes being summoned.

The summoned apes will return to being dead a short time after Korga is defeated (possibly once all aggro is lost).

Once Korga is defeated, a chest will spawn and the Highborn Kings Waypoint will open, allowing easier passage to the Legendary Jotun Stargazer should the party wipe.

Section-stub. This key section of the article is incomplete. You can help the Guild Wars 2 Wiki by expanding it.
Reason: Missing skills
Retrieved from "https://wiki.guildwars2.com/index.php?title=Korga_the_Mighty&oldid=1976142"
Categories: